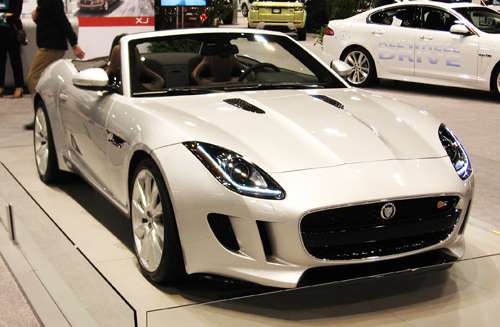 Jaguar provides the highlight of the Denver Auto Show

While the most impressive new model at the Denver Auto Show was probably the new Jaguar F-Type two-seat convertible, one recurring aspect of the many automaker presentations during press day was an upbeat attitude on the industry and a complete lack of whining over CAFE standards.
Advertisement

Dennis Lassiter, a communications executive for Jaguar, announced the brand would be introducing a new car roughly every six months for the next couple of years.

He talked about the new Jaguar's Instinctive all-wheel-drive system and its rear bias that allows the driver to indicate the desire to funnel up to 30 percent of drive force to the front wheels while blazing fast silicon chip brains select the wheels to give the oomph.

The new Jaguar will have options of a 4-cylinder, turbocharged engine or a V6 variant. The 385 horsepower 5.0-liter V8 will do zero to 60 in 5.5 seconds, with a 6-speed automatic transmission, while sipping fuel at the rate of 23-mpg highway.

Jack TerHar, of Colorado’s renowned showroom of premium and exotic nameplates told of his first knowledge of the F-Type convertible project. Visiting with one of Jaguar’s designers in 2004, the Brit had described his vision and drew a rough image of the roadster on a napkin at an English pub at 2 a.m. one night.

“We were totally pissed, as the English put it,” he said. Despite their inebriated state, TerHar remembered that first impression and admitted the final production of that fevered dream turned into something beyond what either of them had ever imagined.

With it’s wide muscular stance and low profile, the Jaguar F-Type convertible is only three quarters of an inch shorter than a Porsche 911, but has a wheelbase 6.7 inches longer, resulting in almost perfect 50/50 balance between front and rear loads.

“It’s a thrill to drive on the track,” beamed TerHar. “I was amazed.”

The roadster has an available suspension dampening system and a dynamic mode that stiffens the suspension, tightens throttle response and instigates more aggressive shift points for the 6-speed gearbox.

A hidden rear spoiler is activated at 40 mph, rising to provide additional downforce. The transmission was developed by Zeta specifically for this model. It features five seating and 19 interior trim color options with a base price of $69,000.

This two-seat beauty will start arriving at US showrooms like Sill-TerHar in May.