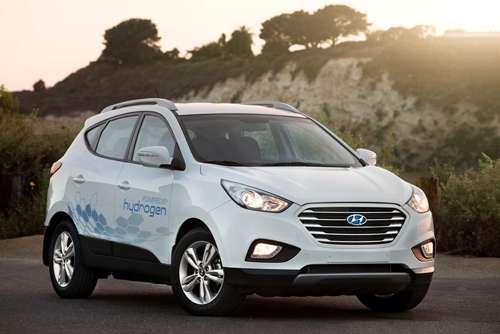 Hyundai is the foremost beneficiary of a $3 million grant from the California Energy Commission to Hydrogen Frontier, who will build a totally renewable hydrogen energy generation facility to serve the Hyundai hydrogen fueling station in Chino CA.
Advertisement

All the fuel generated and dispensed at the station will be from a totally renewable source, while 100-percent of the power used there will be provided by a renewable energy firm.

The totally renewable source of hydrogen is water, from which the hydrogen will be extracted via electrolysis.

The new generation facility will produce at least 100 kilograms of hydrogen per day – enough to refuel up to 9,000 vehicles with hydrogen every year. Operating at pressures of 350 Bar or 700 Bar will allow fueling of all fuel cell vehicles including quick fills.

The CEC grant is being used to update and expand production at the testing facility for Hyundai America Technical Center, Inc. The existing hydrogen generation station was built in 2005 to provide fuel for research carried out with Hyundai’s fuel cell vehicle fleet.

In addition to the $3 million from the CEC, another $1.7 million will be kicked in by Hydrogen Frontier Inc., Powertech and ITM Power to bring the facility up to current industry standards for the generation, storage and dispensing of hydrogen.

“Hyundai has been supporting governments, energy companies and other organizations globally to develop an easily accessible and affordable hydrogen infrastructure,” said Dr. Sung Hwan Cho, president, Hyundai America Technical Center, Inc. “With world-class partners like Hydrogen Frontier and the support of the California government, we are expanding the hydrogen fueling infrastructure and taking one more step toward mass production of a fuel cell electric vehicle.”

The upgrades are scheduled for completion by October 2014, when the first publicly accessible hydrogen fueling station in San Bernardino County will open. This facility will greatly compliment the existing hydrogen fueling network in California.

Hyundai began production of the Tucson, a hydrogen fuel cell vehicle (FCV) in Korea last January, making Hyundai the first automaker involved in the commercial production of a hydrogen-powered vehicle.

The first completed vehicle rolled off the assembly line on February 26. Hyundai is probing the potential demand for the Tucson FCV in the U.S. market, mostly in California, where hydrogen refueling network has begun to take shape.

There are currently eight hydrogen fueling stations in California, with another 17 in development. .

Hyundai has been researching the use of hydrogen fuel cells in the USA since 2000, is a member of the California Fuel Cell Partnership and has conducted fleet testing of three generations of SUV-based hydrogen vehicles across the country.

FCVs satisfy the need for a zero-emission electric car with a range comparable to a gasoline vehicle, that can also be refueled in about the same amount of time.

It has been a long time coming, but perhaps the age of the hydrogen-powered vehicle is growing closer every day.