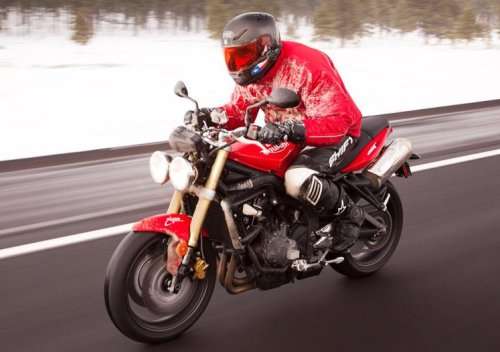 How rocket science gets a boost from Triumph street bike

So you’re charged with designing and building a suborbital rocket craft with a rocket piston pump under considerable potential stress and wear – so how do you test it while on the ground? Scientists working on parts for the Lynx Suborbital Vehicle at XCOR decided they could best test out the piston pump on a Triumph Street Triple motorcycle.
Advertisement

"We debated how best to put many hours of wear time on the critical bearing components of our rocket propellant piston pump, that are subject to significant wear and tear," said Dan DeLong, XCOR Chief Engineer. "This particular motorcycle, the Triumph Street Triple, develops about the same horsepower and has the same cylinder arrangement as the liquid oxygen and kerosene fuel pumps for the Lynx suborbital spacecraft. That makes it ideal for a long-life pump test platform. The bike is much less expensive to operate than the full up rocket pump test stand. We're adding hours of run time each ride, not just minutes."

Of course, where better to test out a part for a spacecraft than the place known for interplanetary travel for over 60 years – Roswell NM! Take it out on the former subject of prose, poetry and song – Route 66, the pre-Interstate route of choice between Chicago and Los Angeles.

The Triumph street bike was modified to work with the XCOR rocket piston pump technology and subsequently shipped to Motion Performance in Roswell, where XCOR engineers finished modifying and testing the bike for the trials.

After admirable presentations at nearby schools as part of XCOR's ongoing Science, Technology, Engineering and Mathematics (STEM) educational outreach, the Truimph “rocket-bike” and the XCOR team were given a send-off by Roswell Mayor Del Jurney and members of the Roswell-Chaves County Economic Development Corporation. Appropriately the trip launched from the Robert Goddard Museum, in honor the father of liquid rocket science and his early pioneering work in Roswell.

"We put twenty hours – the equivalent of 400 Lynx flights – on the rocket pump bearings by driving from Roswell to Mojave taking periodic data readings along the way to make sure things were in good condition," Dan stated. "The trip was a great success and the bike performed flawlessly. Plus we got to drive through some of the most spectacular parts of the American Southwest."

The Lynx rocketplane is being developed to cash in on the lucrative suborbital space market, able to take small satellites, payloads or a single passenger for the ride of their life, reported for $95,000 for a 90-minute flight.

"XCOR continues to solidify its reputation as an innovative, nimble company when it comes to research and development practices," commented XCOR Chief Operating Officer, Andrew Nelson. "This test would have cost us over $500 per minute had we operated it on a traditional pump test stand. The entire trip represented about half a million dollars in net savings in both time and money for the company. More importantly, it validated that our critical pump subassemblies will have the ultra-long life needed to meet the safety needs of our customers and a vehicle that is designed to fly thousands of times over many years. Oh, and everyone had a lot of fun along the way!"

Naturally riding a motorcycle through some of the most stunning country in the U.S. while on a Triumph street bike and saving the company so much money, they probably let them spend a little of it! Nice work if you can get it.

"We saw some amazing country," remarked XCOR Senior Engineer and principal driver Mike Valant, "we traveled through New Mexico, passing the Very Large Array, then turned northwards to Route 66, traveling as much of the old highway as possible. Meteor Crater was a highlight, as well as the towns of Holbrook, Seligman, Kingman, Oatman, all the classic waypoints on the Mother Road. We drove through sun, snow, rain and everything in-between. Personally for me, it was one of the greatest adventures I've had. It was challenging, and there was a lot of payoff. In addition to keeping the bike on the road through all the weather, we had to pay attention to how it was behaving and make sure there was no trouble."

Since they mentioned it, Oatman is an old prospectors town where there was once a rich gold mine. Nowadays you can take a tour through the mine and then tell people you not only traveled on Route 66 but under it as well.

So now you know how rocket science was helped along by the Triumph Street Triple. Isn’t technology grand?!?

Tsingshan's Threat to Tesla: EV Maker Is In Battery Crosshairs
Tesla-Funded Research Reveals One of The Biggest Mysteries of EV Battery
END_OF_DOCUMENT_TOKEN_TO_BE_REPLACED