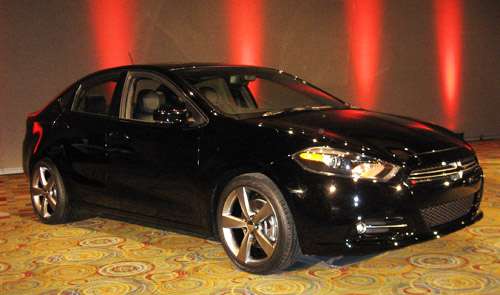 How the 2013 Dodge Dart hits or misses its target

The 2013 Dodge Dart took the spotlight yesterday during a Chrysler sponsored luncheon for the automotive media, marking the opening of the 2012 Denver Auto Show.
Advertisement

The striking new compact from Dodge is long on choices of paint, interior color schemes, variations on the front grille’s look and all at an attractive price point.

The production model on display showed excellent fit and finish, but represented only one of the myriad variations of exterior trim choices, interior appointments, engines, transmissions or wheel styles available.

Cyril Benitah, a engineer involved in the development of the of the 2013 Dodge Dart, addressed the assembled journalists quoting CEO Sergio Marchionne’s pronouncement that, “As we design a car it needs to stand out!”

In these terms, Dodge has hit the mark, giving the new Dart a distinctive look that will stand out in the compact segment where much of the competition has grown hard to tell one from another.

What remains unclear at this point is how quickly the upper trim levels and optional add-ons raise the sticker price form the base of $15,995. The pre-production model on display in Denver was close to the top trim level despite the lack of any identifying badge we noticed.

Admirable features identifiable as standard include projector headlamps and unique LED lighting in the rear is reflected rather than direct illumination, creating a striking effect. A sound dampening laminated windshield is included on all models.

Inside, a clever storage compartment is concealed beneath the bolstered passenger seat, large enough for netbooks, iPads, purses or other valuables to be stowed safely out of sight. An 8.4-inch display screen allows the driver or passenger to control climate or audio either via touchscreen or by traditional knobs.

According to Benitah, a lot of time spent studying the way humans use machines resulted in significant ergonomic enhancements, like the way turn-by-turn navigation can be displayed right in the instrument cluster, making directional guidance as easy as checking your speedometer. Indeed the digital gauging can be set to preference, displaying information to suit.

Time spent in wind tunnel research resulted not only in the sleek, svelte look of the 2013 Dodge Dart but also in an active grille shutter system that reduces drag at high speed.

The 2013 Dodge Dart uses 16 percent high strength steel in significant stress points to reinforce the passenger cabin for safety. Features like a blind spot detector and other atypical amenities in a compact car hint at unusual value in a small car.

Dodge has hit the target with the 2013 Dart in its sharp looks, level of personalization, and relative value in the compact car segment. What remains to be seen is if its cost of operation, fuel economy and reliability can live up to its considerable promise.

An all wheel drive version, as well as an SRT4 engine have been discussed, but at present, no plans for either are in development.

The 2013 Dodge Dart will be available this summer and we hope it hits a bull’s eye. A success in this segment would go a long way to reestablish the smallest of the Big Three as a major contender in the global automotive market.