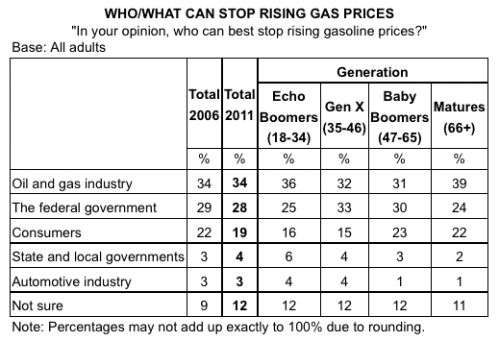 High gas prices have forced half of America to cut back

Memorial Day ushered in various activities marking the start of summer. Among these you will find the first cookouts of the year, swimming pool openings and thoughts of summer vacations. It also means the summer driving season and higher gas prices are having an impact. Fifty-one percent of American auto owners say they have cut their budget to pay the added cost of transportation.
Advertisement

Not surprisingly, lower income households are hurt the worst. Almost two-thirds (65%) of those earning less than $35,000 total per year have cut back on products or services compared to 38% of those who have household incomes of $100,000 or more.

This information comes from The Harris Poll of 2,184 adults, surveyed online during the period May 9 to 16, 2011 by Harris Interactive.

People are cutting back on both dining out (28%) as well as grocery spending (24%). One in five admit curtailing entertainment (18%), while others are simply staying home more (11%) and or have reduced clothing expenditures (10%).

Folks are even lengthening the interval of personal grooming, such as hair cuts or manicures (6%), not to mention delaying auto repairs and maintenance, movies or everything in general, applying to five percent each.

Where to find a solution to the problem comes down to three things with what’s generally considered to have the most influence on price. Nearly 24 percent think oil industry profits have the greatest influence on rising prices while 22 percent relate it to the global price of crude oil and 21 percent believe it results from instability in oil producing nations.

One-third of those polled (34%) think only the oil and gas industry can solve the problem. The federal government must do something in the eyes of 28 percent while 19 percent believe consumers have the power to stop rising prices.

A few leave it up to state and local governments or the automotive industry itself, 12 percent haven’t got a clue.

The number of people thinking automotive manufacturers are not moving quickly enough to provide high mileage vehicles has dropped from 2006 when 74 percent held this belief to only 53 percent now. Twenty-two percent believe the auto manufacturers are doing their part and twenty three percent have no opinion.

This Harris Poll was conducted online within the United States among 2,184 adults (aged 18 and over), of whom 1,882 own a vehicle. Figures for age, sex, race/ethnicity, education, region and household income were weighted where necessary to bring them into line with their actual proportions in the population. Propensity score weighting was also used to adjust for respondents' propensity to be online.

Frank Sherosky wrote on June 4, 2011 - 9:48pm Permalink
I respectfully disagree with the perception that the auto industry cannot do more. For example, where are the nat-gas cars? Where are the high-tech engines like the GM HCCI technology? For sure, they know about the split cycle air hybrid of Scuderi and split cycle of Tour, and the external combustion engine of Cyclone Power. Seriously, electrification is simply too expensive for the masses. The only way to get fuel costs down is to use less of it; and that means greater efficiency with gasoline, plus start using dual fuel with nat-gas. Timely report, Don.
Laramie wrote on June 5, 2011 - 1:04am Permalink
Frank, from a 10,000 foot overview, you raise a good point, but once you get down to the nitty gritty on this topic and begin to analyze the average intelligence that is our nation, you would soon begin to realize that most of the technology you just proposed is realitivley new and has not been tested. Liken it to a computer if you will. By in large people are simply "dumb" around a computer. Once upon a time a rather well known company today got its start by issuing operating systems that had issues and fixed those problems as they arose. For the computing industry, this method worked well, but it would not work well in the auto industry and that's the basis of my point. Auto manufacturer's must, absolutely MUST test, design, calculate, and scheme every little detail out of new technology before they issue a new product to consumers. If they didn't, well all of our automakers would be in the same boat that Toyota is but on a much much higher scale. Can you imagine if 150,000 Cyclone powered cars were sold and each and every one of them had a severe issue causing severe injuries or death? All I'm saying is that it would be safe to bet that our automakers are testing new technology as best as they can. We know only what we know because of inside information and sheer speculation. I can assure that there are much greater secrets and bits of information to be learned that our automakers aren't letting go of. I do agree however that electric cars aren't the best idea out there just yet. Especially with the way that they are being marketed. Sure, a 100% electric powered vehicle does not use gas, but by in large our nation is powered via coal and oil so in the grand scheme, we still have our petro dependencies, but we just try to be a little more secretive about where and what we depend on the most.