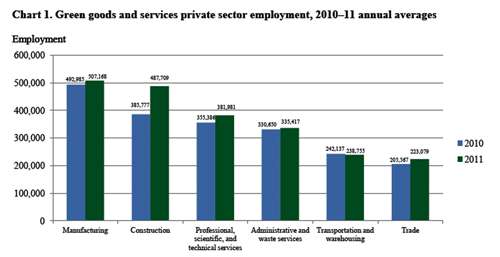 Though the ne'er-do-wells at Fox News seem to continuously attempt to undermine any true progress, a report by the Bureau of Labor Statistics clearly reveals Green Jobs grew four times faster than any other segment of the economy in 2011.
Advertisement

The consistency of Fox News insistence that electric cars and solar energy are wasted effort and funding can only lead one to think they follow an agenda driven by corporations with something to lose in the greening of America.

Could it be they haven’t yet found a way to charge us for capturing the power of the sun or the wind?

In fact, 3.4 million American workers are now employed in green jobs, including those developing more efficient engines for our cars and trucks or better batteries for EVs and hybrids – that’s in addition to those providing solar installation or manufacturing photovoltaic collectors or wind generators.

The chart (above right) reveals how green jobs in the private sector are leading the recovery in nearly every category in 2011:

Nevertheless, this is not news to those who don’t believe Fox News distortion of the facts. The Brookings Institution reported the clean economy added half a million jobs between 2003 and 2010 and, during that period, clean tech jobs grew more than twice as fast as the rest of the economy.

The Los Angeles Times has also noted that recent growth in green jobs follows a surge in public and private investment in clean energy in 2011.

Of course, you don’t have to believe us if you don’t want too.

More recently, the Weekly Standard's Stephen Hayes claimed that "we haven't seen many gains" from these investments.

Just this week, Neil Cavuto said on Fox Business that Obama's green initiatives have "not had the big tangible jobs bang for the buck that you would think."

Despite the clear evidence clean energy investments are effective, do you really expect these magpies to change their tune?

We suspect they are simply doing the jobs they are paid to do – manipulating public opinion with barefaced misinformation and sophistry. Perhaps P.T. Barnum said it best: “There’s a sucker born every minute!”

Sadly, such is the world we live in.

Incidentally, 2011 is the most recent year for which the Bureau of Labor Statistics has analyzed data.

Aaron Turpen wrote on March 25, 2013 - 2:26am Permalink
Corporations are behind the "greening of America." How do you think this stuff gets done? Exxon owns more windmills than any other company in the country. BP, Chevron, and the rest of the "evil oil" companies are all also heavily vested in alternative energies. Faux News is just the puppet outlet for the pretend right.