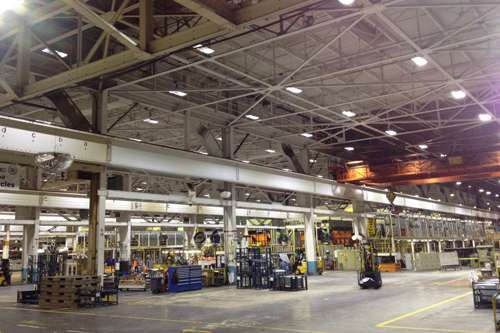 GM plant conversion to LED lighting to save $800K

If you have noticed how vehicles from GM and other automakers have been converting lighting systems to LEDs recently, it won’t surprise you the same approach in automotive fabrication plants can save a lot of energy and thus lower the cost of cars.
Advertisement

GM has made this change in its Lordstown OH stamping facility (pictured here) used to fabricate the Chevrolet Cruze. It is the largest conversion of this type undertaken by the automaker in the US.

The goal was to lower costs and energy consumption while reducing maintenance requirements and the new installation has achieved all three goals and then some.

“We can wirelessly control our lights without having to spend a lot of time and resources installing a separate control system,” said Chuck Simpson, Lordstown site utilities manager.

In addition, the change out should reduce energy consumption by a staggering 84 percent (don’t you wish you could do that at your house or business?) while preventing the release of 8,500 metric tons of CO2!

That’s still not all – you know how LEDs are supposed to have this really long lifespan compared to incandescent lights? The new illumination at Lordstown should last 150,000 hours without replacing a single element in any fixture. That’s over 17 years without changing a light bulb.

A mature person might have to leave a note somewhere to remember how to do it after that much time – or just ask a teenager to take car of it and hope it isn’t considered to be beneath them!

All the lighting is manipulated by a built-in wireless control system, allowing lights in appropriate parts of the plant to be set at various intensities and intervals in keeping with production, while illumination dims during breaks and between shifts. Selected high bay fixtures have replaced fluorescent nightlights used during facility down time.

Of course, it can be reconfigured as the production schedule or work shifts change. Flexibility and savings are a great combination.

“We saw this project as a great opportunity not only to enhance lighting in our facility and realize significant annual energy and maintenance savings, but also to do our part to reduce our carbon footprint as a company and help General Motors continue to be a leader in innovative, green technology solutions,” said Steve Rhoades, Lordstown Complex manufacturing engineering director.

GM has made a worldwide commitment to environmental stewardship and is working to reduce the overall amount of energy used in its facilities by 20 percent by 2020.

At present, GM claims to be the foremost automotive user of solar power in the US and cites an EPA ENERGY STAR Partner of the Year - Sustained Excellence award, to back it up. This is the EPA’s highest recognition for corporate energy management.

“With 6 million square feet of buildings and lighting, there is a tremendous opportunity to become the benchmark in green energy solutions,” Rhoades remarked with a smile, “as well as save a lot of money.”

Kermit the Frog, of Jim Henson’s Muppets fame, has been known to state, “It’s not easy being green!” Easy or not, it would seem the greening of the Auto Industry could pay them back quite handsomely – not only stockholders but consumers as well.

We certainly can't find anything wrong with that.