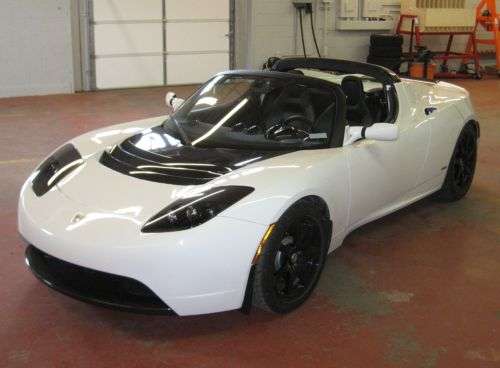 Hansjorg von Gemmingen, who bought the 83rd Tesla Roadster sold in Europe, has crossed the 100,000-kilometer, zero-emissions threshold - the greatest distance traveled by any Tesla vehicle to date. Von Gemmingen drives it daily, charging nightly with just a standard household outlet, proving the electric Roadster functions as a daily commuter while not looking like an ordinary car at all.
Advertisement

"Driving the Roadster is still thrilling, and I enjoy every single ride," von Gemmingen says. "I'm constantly impressed by the durability and performance of Tesla's technology."

A stockbroker in southwest Germany, von Gemmingen uses the Roadster for all his travel regardless of the distance and reports never having any trouble finding a place to plug in. Not surprisingly, his 82-year-old mother-in-law installed a 32-amp (240-volt) plug to ensure more frequent visits. In fact, daytrips to his extended family are partly responsible for racking up the mileage on the electric blue Roadster.

"The Roadster handles long road trips with ease," says von Gemmingen, who made the 800-kilometer trek to Berlin for the Tesla owners event last year. "As long as you have somewhere to plug in for a bit along the way, it's simple to drive the car no matter where you're headed."

Von Gemmingen first saw the Tesla in a German Business Management magazine, and liked the 340-km range, instant acceleration and zero-emissions - he ordered one immediately. When he first got behind the wheel at the Geneva Motor Show that year, he was convinced he had made the correct call. Once his Roadster arrived, he has been behind the wheel at every oppotunity.

In just two years, Von Gemmingen has driven farther than any Tesla owner. Even in cold weather, when most sports cars are garaged, he’d rely on the car's adaptive temperature and traction controls – merrily motoring through the winter.

Collectively Tesla’s vehicles have amassed more than 17 million real-world electric kilometers, Tesla's has sold a global fleet of over 1,600 Roadsters to drivers who haven’t compromised performance, style or driving range to go green.

The experience gained with the Roadster and customer feedback informs the Model S making it the best premium EV sedan on the market when it launches in 2012.

Tesla owes a debt of gratitude to their Roadster owners for their support of the EV revolution for making vital, early investments in its creation.

In other news, the manufacturer is collaborating to installing a recharging network across England – watch TorqueNews for more information.