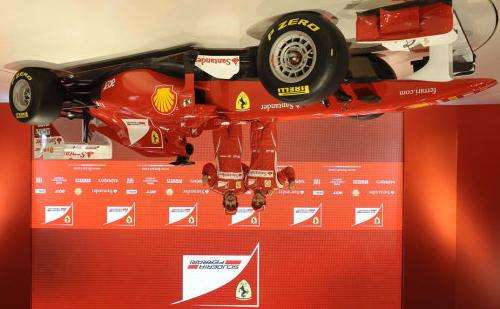 It’s been theorized for years that the upside down wings on the front and rear of Formula one racers generate enough downforce that such a car could actually be driven upside down, given the proper speed and a track specially built to allow for such a stunt. This weekend that theory was proven on the Hot Wheels Test Track.
Advertisement

No it wasn’t done with tiny little models, but a real full size driver in a full size Formula 1. The track looked like something built for models, but was a full size race track with a long straightaway allowing the racer to reach the 306-mph speed needed before entering the section of the track that inverted the car to run upside down for what appeared to be a quarter of a mile.

It then came to an opposite track inversion which turned the F1 right side up before the driver, blacked out from the G-force of the second flipover, was slowed automatically to a stop.

Technicians nervously monitored the special NASA-style suit that measured the driver’s biological readings. They held their breath waiting for him to regain consciousness after the amazing feat. After a few tense moments, he pushed up the cover to the cockpit and stepped out of the car.

Next the program showed Tanner Foust’s record setting 322-ft jump in a four wheel vehicle, also with the Hot Wheels logo painted on the side and that video is on YouTube for all to see.

However, an extensive search of various online resources shows no trace of the remarkable F1 feat. There’s nothing to be found online about the Hot Wheels Test Track, except for a toy by that name, but there it was right on the TV.

It is indeed a strange feeling to see something on the television you can not verify online thereafter, but some cars can drive upside down.

For more information on the physics involved, click here.

Fernando Alonso wrote on May 31, 2011 - 6:59pm Permalink
Funny. "...allowing the racer to reach the 306-mph speed needed ..." "However, an extensive search of various online resources shows no trace of the remarkable F1 feat. " <strong> An F1 car going 306 miles per hour is, by itself, remarkable. Because it's impossible. Maybe this video can be found on one of the humor sites.
Anonymous wrote on September 9, 2012 - 10:45pm Permalink
306mph was a mistake. It should have said kph instead
Just a Hot Whee... wrote on May 31, 2011 - 7:27pm Permalink
It is hilarious that someone actually fell for the Hot Wheels publicity stunt. It was ALL FAKE =D Just a long TV ad featuring some CGI to sell toy cars to children or fool grown ups that were not paying attention LOL
Rahul k Dinesh wrote on June 1, 2011 - 1:55am Permalink
306mph!! I thnk it's 306kph! Othrwise it's a joke!
Anonymous wrote on June 1, 2011 - 10:45am Permalink
It's kph kids... Settle down
Anonymous wrote on June 2, 2011 - 11:46am Permalink
If you actually thought it was real your an idiot. The writer of this article should've know better. lame article.
Anonymous wrote on August 10, 2011 - 12:03pm Permalink
Actually...here's the link...and it's definitely cgi animation. http://www.youtube.com/user/HOTWHEELS?v=N7gh306R1js&feature=pyv&ad=
Anonymous wrote on September 28, 2012 - 2:41am Permalink
Hey guys, I saw a Honda F1 doing over 400 km/h. It was a test driver of the F1 Honda team. They usually don't check those kind of top speeds.