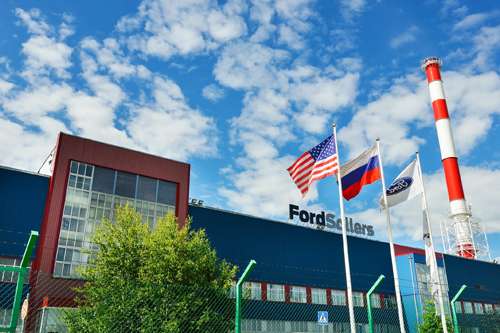 Ford's 1 millionth car sold in Russia was a Focus

Ford has sold its one-millionth vehicle in Russia, where until a couple of decades ago automobiles were beyond the grasp of most citizens, and it was a Ford Focus.
Advertisement

There, in a nutshell, lies the impetus for the brand’s globalization of the product line. Ford entered the Russian market during the mid-90s, a few years after the end of the Cold War and the collapse of the former Soviet Union.

The brand sells vehicles there as part of a joint venture called Ford-Sollers. The concern will construct a $274 million engine plant in Tatarstan, the first passenger car engine plant in the region.

Next year, Ford will launch the all-new EcoSport in the Russian market, and has already begun full production of the Ford Explorer there – the first time the SUV has been fully fabricated outside the U.S.

Not only was the Ford Focus the best-selling model in the Russian mid-sized car segment for 2012, but it was also the world’s best-selling passenger car nameplate as well, according to global market registration data from Polk.

“We are very grateful for our Russian customers’ trust and loyalty to Ford vehicles since Ford re-entered the market in the modern era,” said Ted Cannis, CEO and the President of Ford Sollers. “And, the strong Ford Focus sales results show that this model is the one of the most beloved in Russia and the world.”

Ford is planning a return to profitability in Europe and Russia is an important region in its global market strategy. while Ford Sollers vehicle sales went up by 11 percent in 2012 selling a total of 130,815 units.

Sales of the Focus, adds to the totals realized by the Ford Kuga, Explorer and Transit, another component of the brand’s Russian sales, which are all showing big gains. Last year, Explorer sales tripled, Kuga was up 45 percent, and Transit numbers increased by 56 percent.

Since small utilities are the fastest-growing vehicle segment globally, Ford’s highly efficient SUVs are expected to outpace the overall industry over the next five years, according to IHS Automotive.

Meanwhile, the Ford Focus has been the top seller in Russia since 2003, setting a benchmark for safety, quality and design.

The one millionth Ford vehicle was built at the Ford Sollers assembly plant near St. Petersburg, just one of the 600,000 Ford Focus cars sold in Russia.

“We continue to deliver the products that our customers want and value throughout the globe, creating a better world and driving profitable growth,” said Cannis. “Russia is on its way to being the largest market in Europe and presents an enormous opportunity for growth.”

Ford is on the ground and maneuvering to get a sizeable share of the growing Russian automotive market.