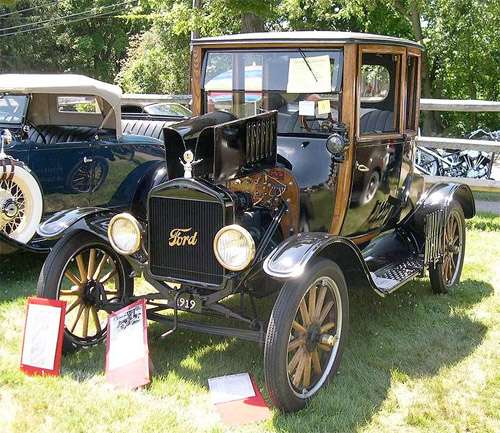 The car that came in any color, “as long as it’s black,” was introduced to the American public on this day in 1908 by Henry Ford.
Advertisement

The Tin Lizzie, as it was affectionately known, sold for $260 in 1924, and had become so popular necessity forced Ford to invent the assembly line. Over the next 19 years, 15 million Model T’s were built, one rolling off of Ford’s line in Highland Park MI every ten seconds.

By 1927, half of all the cars in the world were Ford Model T’s. It was named the most influential car of the century in an international poll in 1999.

Its success resulted from a low price and the use of interchangeable parts, putting it within reach of the average man of the day. The Ford’s of that day possessed many innovations, just as they continue to today.

"I will build a car for the great multitude,” Henry Ford stated. “It will be large enough for the family, but small enough for the individual to run and care for. It will be constructed of the best materials, by the best men to be hired, after the simplest designs that modern engineering can devise, but it will be so low in price that no man making a good salary will be unable to own one and enjoy with his family the blessing of hours of pleasure in God's great open spaces."

The Model T had a fuel economy of 13 to 21-mpg and could burn gasoline, kerosene or ethanol, until the advent of Prohibition made the latter hard to find. The starter battery wasn’t standard equipment until 1926, a hand-cranked magneto taking its place before that.

This device required turning the crank at just the right speed to turn the engine over and get it to start, so it was turned with an open hand in case the magneto reversed direction violently in what was termed a kick-back. Electric headlamps were added in 1915 and though a generator was included the magneto was retained for some years.

When electric starting was made standard in 1919, it was activated by a small footswitch on the floor to the driver’s left.

The model pictured above is a 1919 Ford Model T Highboy Coupe photographed at the Bay State Antique Automobile Club’s July 10, 2005 show at the Endicott Estate in Dedham, MA by Sfoskett.

Notably the Model T was rear-wheel drive with a two-speed transmission. Literature of the day called it a three-speed because reverse was considered the third.

Most of the cars we drive today had their humble beginnings in Henry Ford’s vision of a car for the people and use of an assembly line. Currently these lines employ robotic machines alongside human workers producing the highly advanced cars of today.

That’s why were wishing the Model T a very happy birthday on October 1, 2012.