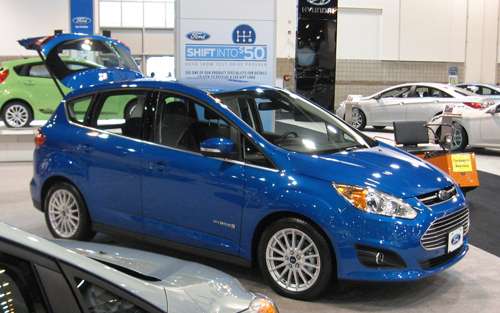 Since beginning the effort to reduce water use in automotive fabrication during 2000, Ford has saved enough water to fill 16,000 Olympic pools or supply 99,000 homes for a year.
Advertisement

The company is on track to reach a goal of consuming only about 1,056 gallon to build each automobile, a 62 percent reduction over the last 12 years.

According to the US Geological Survey, it takes 39,090 gallons of water to make the average car, of course that total includes over 2,000 gallons just to make the tires.

Ford made a firm commitment to lowering its water usage by launching a Global Water Management Initiative, and establishing management of water conservation, quality and reuse of storm and process water. Ford's water strategy is in line with the overall Code of Human Rights, Basic Working Conditions and Corporate Responsibilities adopted by the firm.

“Ford's water reduction success is a result of the company's commitment to reduce the amount of water it uses by aggressively monitoring and managing just about every drop of water going into and out of its facilities and properties,” said Andy Hobbs, director, Environmental Quality Office.

"That's about 10.6 billion gallons of water that was conserved and went to use somewhere else," added Hobbs.

By using an average of 1,056 gallons of water for each vehicle globally, Ford is achieving its goal of a 30 percent reduction in water used per vehicle from 2009 to 2015.

Interestingly, it takes a little more water to build a Ford than it does to put out a house on fire – fire department tankers in the U.S. are required to carry 1,000 gallons in their tanks.

One such project in the dry, arid Chinese Southwest gathered 60 Ford employees from Nanjing, to build water cellars that capture the precious liquid in the rainy season, storing it for use during drier times for eight very grateful families.

However despite such community centered efforts, most of the company’s efforts were focused on the firm’s own facilities.

In the Cologne Engine Plant in Germany, Ford decreased water use by 50 percent per engine through implementation of a dry-machining process.

At the Silverton Assembly Plant in South Africa, the firm began using a $2.5 million on-site wastewater treatment plant that increased the amount of reusable water by up to 15 percent

The Chennai Assembly Plant of India installed a system last September that allows the plant to recycle 100 percent of its water.

What all this boils down to is the new C-Max Energi, pictured above, not only uses far less gasoline at its EPA 100-mpge rating, but takes much less water to fabricate, making it an excellent choice, if either or both issues concern you.

When America finally gains control of its energy future, the use and consumption of water is likely to be the next major point of contention.

Ford is helping to lessen the impact of both oil and water usage with its innovations in energy use, such as the EcoBoost engine, as well as its efforts to conserve water.