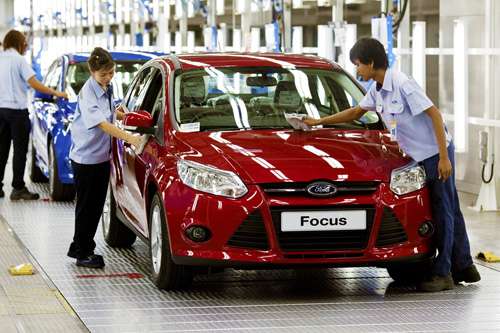 In the first half of 2012, the Ford Focus has sold 489,616 units worldwide, making it the best selling nameplate in the world during that period.
Advertisement

Furthermore, a Ford Focus rolling of the production line today marked the major milestone of the 350th millionth automobile built by the brand.

The Focus claims this status based on global data released by IHS Automotive, which also revealed the Toyota Corolla as their closest competition with 462,187 units sold globally.

The Focus marking the major milestone today was produced in Rayong, Thailand, the 350 millionth vehicle produced in the company’s history, shown at right.

“Consider, for a moment, the enormity of 350 million vehicles,” said John Fleming, Ford executive vice president of Global Manufacturing. “It’s equivalent to producing one vehicle every 10 seconds for 109 years; and, if placed end to end, would stretch to the moon and back – twice.”

First appearing in Europe during 1998, the Ford Focus won Car of the Year in 1999. Now in its third generation launched last year, the Focus has been fabricated on an unprecedented global basis, with more technologies and features economically available to more consumers, such as the Driver Assist systems we told you about last week. Such technology has never before been available in a car at this price point.

Tesla Contemplates A New Strategy for China Retail even As Sales Boom
Jay Leno on Elon Musk & EVs: “I Think He Should Get ... Credit"
END_OF_DOCUMENT_TOKEN_TO_BE_REPLACED