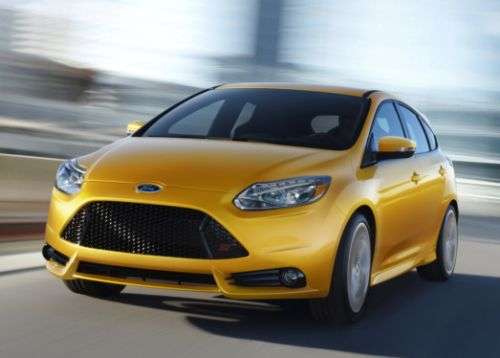 The Ford Focus ST will bring a performance car previously unavailable on the continent to American drivers during 2012. As Ford’s first truly global performance car, the Focus ST is building on the Focus ST heritage in Europe, giving drivers worldwide the opportunity to share in the ribald performance, crisp handling, seductive sound and sporty design the ST badge represents.
Advertisement

The North American production car will makes its U.S. debut this month at the Los Angeles Auto Show. The Ford Global Performance Vehicles group is a partnership formed from Europe’s Team RS and North America’s Special Vehicle Team (SVT) that was responsible for the engineering of the all-new Focus ST, which will be available in over 40 markets, including the U.S., Canada, Mexico, South Africa, Australia, New Zealand, 15 European countries and more.

“Focus ST has not come around by chance,” said Jost Capito, director of Global Performance Vehicles. “What came first was our global performance strategy, which has been developed with North America, Europe and Asia together. With this, the core DNA attributes – steering, driving dynamics, sound quality and power enhancements for all ST models – have been defined to the extent that our engineers can take that global DNA fingerprint and use it to create the new Focus ST.”

The five-door Focus ST is intended to deliver the performance values characterizing Ford ST models. The chassis, engine, resonance and comfort are allegedly tuned to provide an exhilarating experience within a refined ambience – attributes embodying the genetic code for models bearing the Sport Technologies badge.

“This is the first time we have used a Ford EcoBoost engine in a high-performance model, and the result will leave drivers smiling,” said Capito. “They will have a lot of power and torque at their disposal throughout the rev range. For everyday driving, though, the characteristics of this car will let them drive in a more fuel-efficient way than previously, which is an essential part of the ST’s DNA.”

The EcoBoost engine is linked to a six-speed manual transmission, with revised gearing supposed to deliver the maximum punch from each shift. With a stated output of 250 horsepower, the Focus ST can only guarantee a zero to 60-mph clock time of 7 seconds. One could easily expect slightly better performance from that many horses in a car this size, but we reserve judgment pending further investigation.

The European Focus ST featured a five-cylinder engine and was renowned for its signature sound. With the four-cylinder EcoBoost Ford engineers tuned the engine to the same pleasingly robust tone. Part of the process was reworking of the sound symposer, first found on the earlier Focus ST models and subsequently employed on European Focus RS and RS500s.

“People loved the sound of the previous Focus ST,” said Capito. “The physics and acoustics of a five-cylinder engine compared to a four-cylinder are very different, but like Beethoven and Mozart – both of whom created fantastic, yet very different music – we believe the engine note of the new Focus ST will delight enthusiasts in the same way.”

In the cockpit the new owner will experience the recently developed Ford sport steering system. This variable-ratio steering rack increases agility on winding roads while still inspiring high-speed confidence. Purportedly, the Focus ST will fulfill the expectations of race enthusiasts while empowering the capabilities of novice drivers. The steering system is less sensitive when proceeding in a straight line but increases the driver input while cornering. The system also has benefits in tight parking maneuvers, with less effort needed from the driver to maneuver the car.

The Focus ST’s electric power-assisted steering (EPAS) is enhanced by Ford’s torque steer compensation. The aggressive tuning of the steering compensation allows acceleration at full throttle without losing traction on roads with uneven surfaces. The system detects the torque steer created by such conditions and counteracts the effect to virtually eliminate erratic steering.

Further enhancements have been added with emphasis placed on driver enjoyment. Drivers will have three driving modes to choose from thanks to the Focus ST’s Electronic Stability Control (ESC). These can be selected in response to weather or road conditions or just to match the driver’s desire for additional aids to driving.

The standard mode works on all surfaces – dry, wet or snowy – providing stability regardless of the conditions. The second mode, called reduced or wide-slip, turns the traction control off – traction is up to the driver, while the ESC intrudes only when absolutely necessary.

Finally, ESC can be switched off, allowing the Focus ST to revel in its purest form, putting full control of the chassis in the driver’s hands who wants that level of control, for example, on a racetrack. Only the underlying features like enhanced Torque Vectoring Control (ETVC) remain active, optimizing the vehicle’s abilities.

ETVC is a refined version of the Torque Vectoring Control found on base models. The standard system uses torque vectoring by braking, applying brake torque to the inner wheel through a corner, reducing understeer and allowing for more traction, much like a traditional limited-slip differential.

On the Focus ST, ETVC adds steering pressure more aggressively along with cornering control, applying torque to create a yaw effect based on the car’s understeer, both in power-on and power-off conditions. ETVC helps to make the front-wheel-drive Focus ST a true driver’s machine, tackling any corner with sublime confidence.

A highly tuned suspension features enhanced shock absorption and springs taking the chassis down to give the car a lower center of gravity and a more aggressive stance, another aid to precise cornering.

The rear suspension utilizes a number of new parts developed specifically for the Focus ST, including improved suspension knuckles and an all-new anti-roll bar design, both a result of the developer’s desire to give drivers an exceptional degree of feedback and control.

“The same tires will be offered on the Focus ST in every country,” said Matthias Tonn, chief program engineer for the Focus ST. “They are designed to extract the best performance from the car on all road conditions. They don’t compromise on performance, and they get the best out of the chassis and driver systems of the car.”

“The changes we made to deliver superior aerodynamics and vehicle performance have made the new Focus ST even more sporty and distinctive,” explained Martin Smith, executive design director, Ford of Europe. “Exciting new design treatments at the front and rear give the ST a more dynamic and purposeful character, making it very clear this is definitely a sporting Focus.”