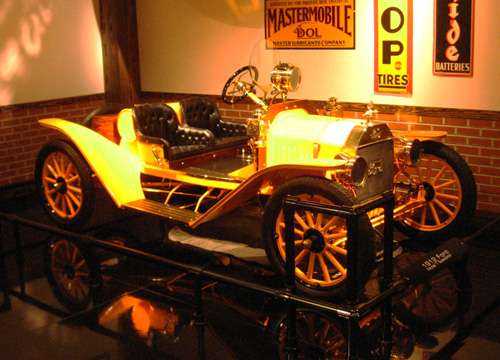 The first coast-to-coast highway in the US opened September 10 of 1913. Originally known as the Lincoln Highway, the road originally ran for 3,389 miles through 13 states, from the Big Apple’s Times Square to San Francisco’s Lincoln Park.
Advertisement

The first coast-to-coast highway in the US opened September 10 of 1913. Originally known as the Lincoln Highway, the road originally ran for 3,389 from the Big Apple’s Times Square to San Francisco’s Lincoln Park through 13 states.

This concrete ribbon was also known as the Main Street across America, in the quaint vernacular of the day. Though one can only wonder how many folks drove cross-country in vehicles like the 1912 Ford Model T Speedster pictured at right, the traffic along the highway was credited with bringing economic progress to many of the cities, towns and villages along its way.

As a young army officer, Dwight Eisenhower was a driver in an army convoy traveling along the Lincoln Highway – a positive influence on the 34th President when the Interstate Highway System came up for consideration.

The roadway was conceptualized and promoted by Indiana entrepreneur Carl G. Fisher and traveled through New York, New Jersey, Pennsylvania, Ohio, Indiana, Illinois, Iowa, Nebraska, Colorado, Wyoming, Utah, Nevada, and California. In 1915, the Colorado Loop was removed, probably due to the difficulty of maintenance during winter.

In 1928, the route was realigned so the Lincoln Highway crossed the northern tip of West Virginia. Thus, a total of 14 states, 128 counties, and some 700 cities, towns and villages were connected forever by the first coast-to-coast highway.

In the US today there are over 4 million miles of roads, and three-fourths of them are rural state or county highways.

More facts about America's people, places and economy can be found in the American Community Survey at census.gov.

Is anyone out there looking for one of those experience/blog/tweet and travel ideas? Pick any means of conveyance and retrace the path of the original coast-to-coast highway and share your experiences along the way. Maybe you’ll pick up some sponsors who want to show they are nationwide.

Come to think of it, doing it in the Ford pictured above in one of those early driving outfits – goggles, hat, gloves and trench coat – would be an interesting experience indeed.

You’d meet lots of interesting people, draw lots of attention in an antique car and garb and probably have the experience of a lifetime. Then again, you could take an old car and convert it to electric and tell the story of driving across the US, remembering anyplace you can plug in an RV, you can probably charge your EV. It would work out great allowing you time to post status updates, tweets, and actually talk with a few folks along the way.

You might even become as famous as Dwight D. Eisenhower, who you might have heard of even though he passed away 43 years ago.