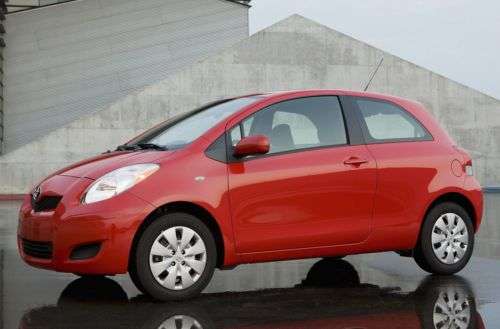 The 2011 Toyota Yaris, in any of its variations, is the essence of the modern commuter – efficient, easy to drive, technologically up to date, inexpensive to operate and far safer than small cars were just a few years ago.
Advertisement

Many auto writers look down at low-powered, utilitarian small cars like this, as they are simply not what fires the passion of the true auto enthusiast. Nevertheless, commuter cars are one foundation upon which a basic American freedom rests – the geographic mobility that enables us to get out and see the varied wonders of this many-splendored land.

For instance the ability of a young person with just $20 to travel 175 miles to concerts, festivals, car shows, scenic areas, state parks or recreational areas is a significant contribution of the Toyota Yaris and other small commuters to our society.

So is the ability of a young couple to get to and from work, shop, build a home, plan and raise a family and so many other aspects of American Dream. The simple ability to get about safely and cheaply is a basic building block upon which our society rests.

Consequently, we salute the 2011 Toyota Yaris for fulfilling its patriotic duty with such flair.

Those less enamored with mere horsepower and performance will appreciate the amount of power available from the 1.5-liter DOHC, 16-valve, 4-cyl. engine with VVT-I. Despite the combined 33-mpg, the Toyota Yaris has more than adequate acceleration for merging onto a high-speed highway or evading a vehicle approaching too rapidly.

Its maneuverability comes not only from the short wheelbase, but the presence of MacPherson struts up front and torsion beams in the back, enhanced by stability and traction systems. Front wheel drive ensures better performance in rain or light snow and the tiny wheels used by small cars in the past are gone for good. The 2011 Yaris comes with 14-inch steel wheels with wheel covers.

Safety enhancements include front disc brakes with ABS, EBD, brake assist and smart stop technology – your 2011 Toyota Yaris cannot run away with you even if provoked into trying.

Of course, there’s a full set of airbags and a lot more features not to be expected in a vehicle with a base price of only $13,765. For example, halogen headlamps, digitally imaged analog gauges, tire-pressure monitoring, a glove box on the driver’s side plus dual compartments on the passenger side and extendable sun visors on both sides. We’ve driven cars costing three times as much that lacked this cheap, simple convenience and safety feature – no one can drive well with the sun in their eyes.

A $1,525 Power package adds power everything – entry, doors, windows and mirrors. The sound system gets major enhancements including CD text display while rear seats upgrade to reclining and folding flat. The wheels get bumped up to 15 inches and a rear window wiper is added. Still with all final charges and specified options the 2011 Toyota Yaris Liftback is only $16,632 delivered.

So the next time you see one of these little commuters, even if it is slowing you down on a two-lane mountain blacktop, give a tip of your hat to one of America’s most basic rights – even the young and the underfunded have the basic human right to move about freely – as do you in whatever you’re driving.

Many of us owe our own participation in that liberty to cars like the Yaris and other vehicles in the Toyota line.

Indeed, it is that very Liberty our armed services are fighting for as we honor our fallen soldiers on this Memorial Day in 2011.