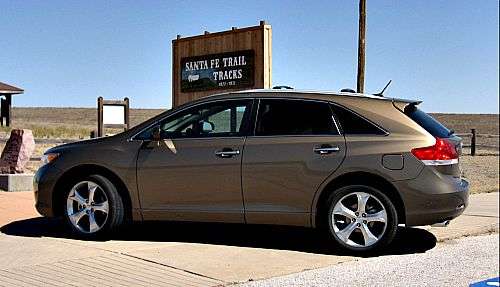 Close-up: The 2011 Toyota Venza is the ultimate blend of car, truck

The Toyota Venza made a good impression on us when we first checked it out back in 2009. It was a nice size and shape, with oversized wheels and a roomy interior, but at that time we didn’t get to drive it very far. Recently we had the opportunity to take the 2011 Toyota Venza on an extended road trip, finding it even more likable than we at first imagined.
Advertisement

Across 1,400 miles of The Flatlands of Kansas and The High Plains of Colorado, the crossover proved itself to be the perfect melding of sedan performance with the wide-open interior space of truck or SUV. It is a consummate overland stagecoach for the modern world – a large roomy interior with plenty of horses pulling it.

Though not quite to the extent of Dr. Who’s Tardis, the 2011 Toyota Venza does feel roomier from within than you expect when looking at it from without. Minivans seem roomy but this is personal space we’re talking about. Here is an unrestrained place for you and your passengers, both in front and in back.

The ponies pulling the crossover dream emerge from Toyota’s 3.5-liter DOHC 24-valve V6 powerplant developing 268 horsepower at 6,200 rpm and 246 lb.-ft. of torque at 4,700 rpm. This power is channeled through a six-speed electrically controlled transmission with Intelligence as well as Active Torque Control.

The latter makes sure the wheels that need the power get it – whether accelerating from a standstill, cornering or coming to a hard stop. The same principles apply to the slippery surfaces resulting from inclement weather. The superior ride and handling are also somewhat dependent on the 20-inch alloy wheels, all-wheel disc brakes and independent suspension, as well as electric power steering.

Besides being roomy, the interior of the 2011 Venza is comfortably appointed with pleasing tactile fabrics and surfaces and a functional, versatile center console with a sliding armrest. We especially liked the voice navigation which unlike my dear mother (whom I was visiting), would alert me to coming turns BEFORE we got there. Of course, mom didn’t like it much – she has never liked having her spirited tirades interrupted and especially by a mindless device.

Nevertheless, it helped us get about a city I no longer know well, safely and efficiently. Over those 1,400 miles, 75 percent at highway speeds, we averaged 23.8 mpg. Not bad for a vehicle capable of towing 3,700 lbs and with over 70 cubic feet of cargo space.

On the road, or about town, the cargo area tonneau cover keeps your belongings out of the sight of those with sticky fingers and little compunction. We also liked the smartphone/device holder – a thoughtful, well-placed amenity into which my iPhone wouldn’t fit, probably thanks to its Otter hard case.

The tow package adds an engine oil cooler, larger radiator fan and a heavy-duty alternator to manage the extra load.

The 2011 Toyota Venza is a sterling compromise between the safe, secure and sure-footed nature of an SUV and the handling, performance and soul of a spirited sedan. The base price with the V6 AWD is $29,750 and the model driven came to $40,174 with most of the options available plus delivery fees.

It is an excellent car for young families or active couples, providing safe, efficient year-round transportation with plenty of room for friends, family, the pooch, shopping or leisure goods and completely capable of bringing along whatever you need to tow.

For a car so practical, versatile and applicable to a great cross-section of society, the 2011 Toyota Venza truly is the crossover nearly perfected. It is a vehicle we can endorse with no small measure of fervor.