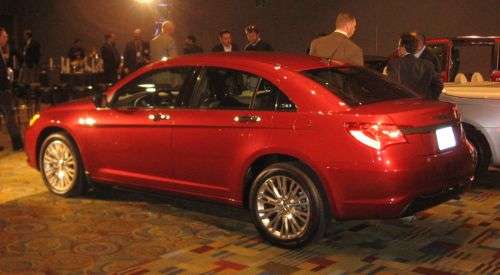 The Chrysler Group’s total retail and fleet sales increased by 27 percent in September creating the best September total sales and Jeep sales since 2007. At the same time new Jeep Compass sold at a 306 percent year-over-year sales level and sales of the next generation Chrysler 200 mid-size sedan were up 87 percent over a year ago.
Advertisement

There is little good news on the economic market and job fronts, but the surge in sales by automakers across the board is a sign the economy is far from anemic.

Chrysler Group’s 27 percent sales surge was driven by retail sales increased by up to 50 percent. Chrysler Group has beaten the average industry sales reports eight out of nine months this year.

“Irrespective of the economy, strong products equal strong sales and with our retail sales up a whopping 50 percent that is exactly what we have,” said Reid Bigland, President and CEO – Dodge Brand and Head of U.S. Sales. “September was also our 18th consecutive month of year-over-year sales growth and we have now gained more retail market share than anyone else in the country. There is no double dip downturn going on around here.”

All the Chrysler, Jeep, Dodge and Ram Truck brands posted sales increases last month. The Ram Truck’s 42 percent sales increase led the way with the largest percentage gain of the brands. Chrysler logged its best sales month since August 2008 and best September sales since 2007.
Chrysler Group finished the month with a 54-day supply of 277,278 models in their line.

Though late year increases of automobile sales is somewhat normal as model years begin to close out, It would seem the government bailout of the U.S. automaker has had the desired effect of stimulating economic growth and job production. On the other hand, the bailout of Wall Street seems to have generally bitten the government hand that fed it.

Keith Griffin wrote on October 3, 2011 - 7:22pm Permalink
The only people buying Chrysler 200s has to be rental car companies. It's a horrible vehicle and the convertible should be put out of its misery.
Don Bain wrote on October 4, 2011 - 4:19pm Permalink
Hey I drove the new convertible and thought it was pretty cool. Of course I only had it for a night so over a few weeks might have thought differently.