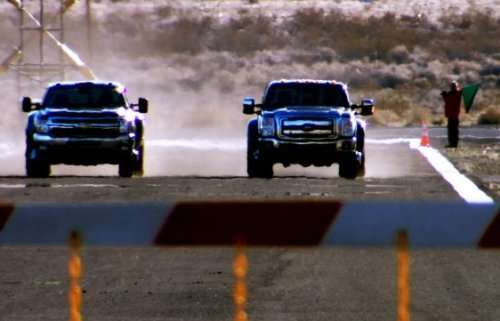 In a recent address to the Rocky Mountain Automotive Press, Tim Jackson, president of the Colorado Auto Dealers, told an assembled group of auto writers, auto dealers and Denver Auto Show producers, “Sales of the Chevy Silverado – a full-size pickup – are up 60 percent. Did you get that? Not six percent, but 60 percent – in this economy!”
Advertisement

It was a startling announcement but one born out by the facts. This sales performance just might have something to do with the considerablae capabilities of the three-quarter ton dynamo.

Chevrolet has recently posted on line the results of their submission of the pickup to independent testing on the track and off road at high altitude against equivalent trucks from Dodge and Ford.

“We wanted to get away from spec-sheet comparisons and show how these trucks perform in the real world," said Rick Spina, global vehicle line executive for full size trucks. "To do so, we engaged an independent company to test the Silverado HD with the Duramax diesel and Allison transmission head-to-head with the competition, and record those tests for everyone to see."

Tests put the trucks through their paces testing acceleration, passing and braking with a loaded bed or, in some cases, a loaded trailer.

In one test, designed to simulate merging onto a fast flowing freeway, three-quarter ton models with a 1,500-pound load, were accelerated from 0 to 60.

The Silverado 2500HD outpaced the F-250 Super Duty, by 0,7 seconds (7.66 to 8.36 seconds), despite a slight advantage in stated horsepower and torque ratings for the Ford.

"We worked hard on the Duramax-Allison combination to deliver torque smoothly throughout the entire power band," said Spina. "That is what gives us class-leading acceleration."

The Silverado also excelled in other acceleration and torque influenced tests, showing an advantage on a seven percent grade and in passing tests at sea level and at 6,000 feet while towing loaded trailers.

Spina hosts the videos with Pro Football Hall of Famer Howie Long. AMCI Testing, an independent company used by many carmakers, was engaged by Chevrolet to conduct and certify the tests.

The full set of "HD to HD" videos can be viewed at chevrolet.com/hd-to-hd-truck-comparison.