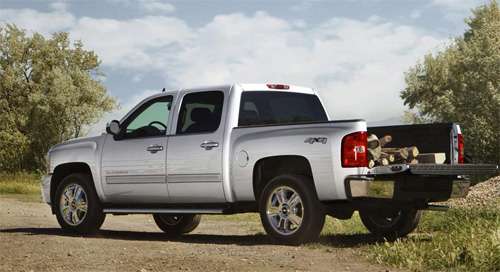 GM trucks were among most searched vehicles this summer, but that’s not a clear indication of their popularity or the economy at large as literally thousands are languishing on GM dealer lots across the country.
Advertisement

Mind you, the Ford F-150 was the top searched-for vehicle, but that has little to do with the fact that the Chevrolet Tahoe and Chevrolet Silverado came in fifth and tenth place respectively on the CarMax.com tally of searches.

The telling part of this apparent contradiction is CarMax.com is billed as the foremost retailer of used cars in the country, so the people on their site are looking for used vehicles while the ones sitting on new car lots around the nation are brand spanking new.

It would seem a few more were expected to sell in this, the best year for auto sales since 2007. Though truck sales were strong early in the year, they have fallen off during the second quarter of 2012.

Such is the gist of a story posted by Craig Trudell and Hasan Dudar of Bloomberg and posted on the San Francisco Chronicle website. The Bloomberg article cites Ward’s as the source stating GM began July with the highest number of trucks in inventory in over 3 years, an estimated 5-month supply.

Reportedly the brand built and distributed enough Silverados to fulfill sales until the new model comes out after year’s end. Having a bunch left when the new ones come out could create a bit of a problem

Both GM and Ford make money on full size pickups and a return to popularity and a sales boost would go a long way to shore up weak stock prices and poorly performing European trends.

Early projections indicate US light-vehicle sales were up 11 percent in July while the first six months of 2012 drove sales totals up to approximately 7.27 million units.

Traditionally and specifically from 2000 to 2007, full-size pickups accounted for 13.5 percent of US vehicle sales. July 2012 projections show a drop to only 11 percent of all vehicles sold, as many go to smaller, higher efficiency choices for transportation.

If sales do not pick up, it may mean cutting production of the full-size workhorses during the next couple months, as GM rebounds from the sudden resignation of Global Marketing boss Joel Ewanick.

However if the pent-up demand that drove auto sales earlier this year takes hold of the struggling housing market (showing some early signs of recovery) as some pundits believe it will, it could be good news for full-size pickup sales. Construction workers drive pickups, period.

The coming redesign of the Silverado is another factor in the overall situation, necessitating a 29-week shutdown as they retool for the new model. The current supply has to last until the next generation rolls off the line, some time after production begins on the new model.

GM is reportedly reworking the Silverado with its sights full on the Ford F-150, America’s best-selling full-size pickup for 30 years running.
If they can take away the F-150’s title, it would be a very big feather in the GM hat.

Any way you slice it, the economy is still the hot-button issue for workers, businesses and voters this year - that goes double for automakers.