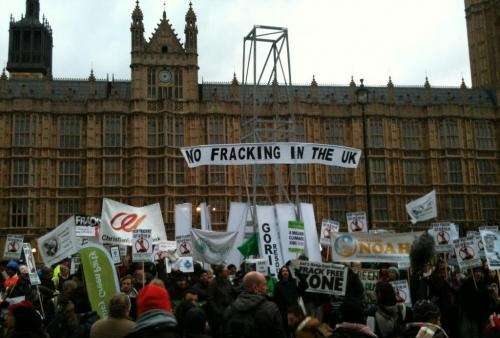 Fracking, or the extraction of natural gas by pumping water and chemicals into deep shale deposits, was banned in England during 2011, a result of two earthquakes in Lancashire blamed on the process.
Advertisement

The Independent, a British publication seemingly leaning towards the sensational, has reported more than half the UK’s land mass could be subject to the invasive search for energy.

“More than 60 per cent of the British countryside could be exploited for shale gas, government documents show,” wrote Oliver Wright today, “as ministers prepare to give the go-ahead for developing the country's most significant new energy source since North Sea oil.”

This announcement immediately led to a gathering of 300 protestors gathered by the Campaign Against Climate Change. The small but vocal group proceeded to erect a mock fracking platform in front of Parliament and laid an ersatz pipeline from there to the US Embassy.

They were expressing their "outrage at the continued exploitation of high-carbon tar sands," according to a follow up on the BBC NEWS website.

"We have commissioned the British Geological Survey to do an assessment of the UK's shale gas resources, which will report its findings next year," the official concluded.

The group took their faux pipeline to the US Embassy because the firm planning to extract the 200 trillion cubic feet of natural gas, estimated to be contained in the British shale strata, is backed by backed by former BP chief Lord Browne. Cuadrilla Resources is a UK firm whose name means “a small group of people” in the Basque dialect of Spanish.

"Government policy is clear, it wants the industry to develop. However, the main barrier is the public perception of the risk it poses to the environment," Martin Diaper, an adviser on climate change to the Environment Agency, wrote according to The Independent.

Cuadrilla raised concerns with a plan for exploratory drilling near the Sussex village of Balcombe last April, but local residents were alarmed by a Durham University study suggesting the process might taint the water supply.

At that time, the Environment Agency stated outright, "The agency would not allow hydraulic fracking to take place in an area where there are aquifers."

This edict, however, was not made public.

According to a further report on Fox News, Cuadrilla cannot hope to resume operations before March 2013.

"We take the potential environmental risks very seriously, and have undertaken a thorough assessment of those risks," stated an Environment Agency spokesman.

The natural gas thought to be hiding beneath the English countryside is enough to power the homes of the UK for the next two years.
Nevertheless, environmental concerns continue to dog the efforts to extract it and this is perhaps understandable on an island – however large, it has only so much inhabitable area.

Natural gas burns cleaner than most other fossil fuels and can definitely do its part to lessen the emission of greenhouse gases, but that potential must be balanced with the environmental costs of retrieving it.

"Pinning the UK's energy hopes on shale gas is a reckless gamble," stated John Sauven, executive director of Greenpeace UK. "We should instead be investing in clean, safe, renewable energy."