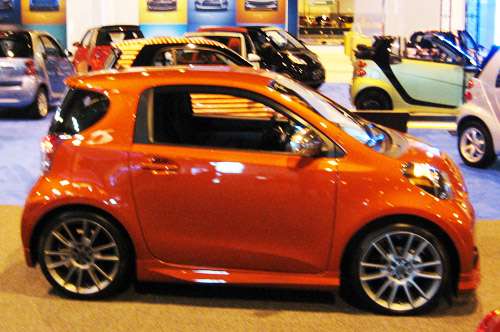 Buy a Scion iQ, get a Sony PlayStation Vita bonus

“Scion is very proud of the iQ’s intelligent and functional design,” said Jack Hollis, Scion Vice President. “Similar to the PS Vita, the Scion iQ comes loaded with premium technological features, has a focus on functionality, is concentrated into a suitably small package and most importantly is tons of fun."

Scintillating analogies aside, Scion is proudly providing iQ owners with an entertaining way to live larger in the world’s smallest four-seater, even when not in the driver’s seat. MotorStorm RC was originally released March 7th as a limited-time free download to PS Vita owners, but is now included with the Scion iQ as an in- vehicle gaming option.

A new generation of urban drivers is arriving with a new set of interests and values, and the Scion iQ successfully takes big ideas and concentrates them in a small package. This is a small car offering all the functionality and comfort drivers expect from a much larger vehicle. The iQ has 11 standard airbags and gets a remarkable 37 miles per gallon, according to EPA estimates.

The base price for the 2012 iQ is $15,265, nicely equipped and with a free PlayStation Vita. An extra $730 is tacked on for delivery, processing and handling.
It’s been said that good things come in small packages, and that saying would seem to be validated in the 2012 Scion iQ and the Sony PlayStation Vita.

For complete details on this special, limited-time offer, click here.

Tesla Giga Berlin's New Hurdle: It's Not Only the Gov't, but Now Tesla Itself
Teslas Are Sold Out Until 2023, But The Timing May Reverse
END_OF_DOCUMENT_TOKEN_TO_BE_REPLACED