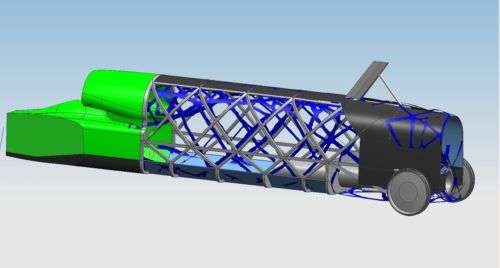 The quest for land speed has been one of mankind’s perpetual pursuits since the dawn of time. It has gone from the preservation of life to a battle against the forces of nature – air resistance, traction, friction, lift and propulsion. To that end the Bloodhound SuperSonic Car (SSC) team has employed the HyperWorks suite of computer-aided engineering tools in the development of its jet and rocket powered car.
Advertisement

Anyone who knows about these kind of records is aware there are at least two different forms of land speed measured – those which achieve their acceleration by driving the wheels, like the cars you an I drive, and those whose wheels simply turn as they are propelled by rocket or jet engine propulsion.

Our search found the current record in rocket propelled land speed is held by former Royal Air Force pilot, Andy Green, set at 760.343 mph in 1997 at Black Rock Desert. The Thrust SSC broke the sound barrier by going Mach 1.02 on the ground.

Canadian and American engineers are currently at work on the North American Eagle project designing a vehicle they hope to push to 808 mpg.

All of this is simply to give you a hint why Altair Engineering, Inc., a leading global provider of simulation technology and engineering services that empowers client innovation and decision-making, is so happy the Bloodhound team is using their software to fine tune the vehicle that may set the land speed record for many years to come. It is designed to achieve 1,050 mph – an ambitious project that would outstrip the North American effort by over 200 mph.

"The key to success with this project is to undertake extensive computer modeling to increase understanding and reduce risk," added Project Director Richard Noble. "We need to prove our concepts by analysis and simulation before we enter the build phase of the Project."

Though the Bloodhounds chassis resembles an aircraft, it has wheels, suspension, steering and brakes, similar to a normal car. Aside from its jet and F1 engines, each component of the car is being custom designed, and Altair's OptiStruct software, the structural optimization technology of the HyperWorks CAE software suite, plays a crucial role in the process.

The lean Bloodhound team, based in Bristol, England, uses technology to engender innovation. OptiStruct was used to optimize the rear chassis and to create a wheel design from the least material possible without compromising its ability to manage anticipated gravitational forces of up to 50,000 G’s.

The design combines a jet engine over the rocket motor. They reconfigured the rear chassis using a steel structure. In all, the vehicle has undergone 10 design modifications to ensure the aerodynamic shape is correct at sub, trans and supersonic speeds.

The team used OptiStruct, to determine the best use of material. The software’s expertise lies in topology, shape and size optimization, enabling engineers to determine the main load paths in multiple design envelopes early in the conceptual process.

"We used Altair's OptiStruct to develop a steel structure, because the team wanted to get the best strength-to-weight ratio," said Chief Engineer Mark Chapman. "We built various models, putting in stringers and trusses. OptiStruct showed us where we needed to put the material. We ended up with an organic, geodesic shape – one that we would not have thought of."

OptiStruct was also used to develop the wheels. The goal was to make the most structural functionality out of the least amount of material. By using a design-of-experiments methodology, engineers optimized the design to reduce loads enough to allow wheels of aluminum instead of expensive titanium.

"OptiStruct showed us where to add and remove material from the parts," Chapman explained. "For us, it was invaluable in turning around designs. We saw the effects of our changes, and the software guided us in terms of adding or subtracting material. We used OptiStruct as a tool to show us the way to design the most efficient structures; we then turned these into manufacturable concepts."

Much work still lies ahead for the Bloodhound engineering team. Detailed designs will soon be finalized as the project enters the build phase. Hybrid rocket testing begin in the UK later this summer. The actual car is slated to be ready for action in 2013.

"I'm very proud that OptiStruct was used in such an outstanding project," said David Mason, managing director for Altair, UK. "Once more, OptiStruct is helping to drive innovation and to realize a project that seemed to be unthinkable only a few years ago. The team members' reliance on technology is enabling them to push the limit on several fronts. Their efforts are expected to yield advances in metallurgy, low-level aerodynamics, high-vibration telemetry and low-level jet and rocket operation. This project has no precedent, and everything the Bloodhound team does is innovative. I'm looking forward to seeing the first real-time tests and the final run for the world speed record at the Hakskeen Pan in 2013."

So what do such endeavors really accomplish, you might ask? Engineering knowledge will be furthered and things learned in the process will find there way into everyday objects over time.

Besides, it is feats like this that expand our vision of what is possible and inspire our children to achieve.