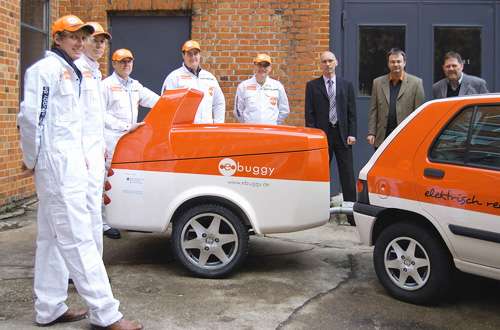 Would an electric vehicle make more sense if a rentable two-wheel battery pack ebuggy from e-Mobility could be hooked up when you need to extend range beyond a daily commute?
Advertisement

In Stuttgart, ebuggy GmbH is betting it would and the prototype ebuggy has been completed and shows great promise in initial testing. The concept would provide unrestricted range to EVs in a commercially and logistically applicable model. The company plans a network of relay stations where EV drivers can hitch up battery trailers.

When embarking on an extended journey, the ebuggy battery trailer can be hooked up at an ebuggy relay station extending the range of the vehicle by hundreds of miles. On arrival, the battery trailer is dropped off at the final service station. If the journey is even longer, the trailers can be exchanged when necessary so the true range would be unlimited. Switching out units requires only two minutes.

"ebuggy allows the automotive industry to build reasonably priced electric vehicles with a smaller battery because ebuggy is available for longer distances. As a result, electric cars will become cheaper than vehicles with a combustion engine and e-mobility will be able to assert itself rapidly and dynamically," stated Dr. Manfred Baumgärtner, Managing Director of ebuggy GmbH.

Pictured above (at right): the ebuggy team with the prototype that has been proven effective. (Source: PRNewswire)

The range-extending EV accessory was developed with the support of Germany's Ministry of Economics and Technology (BMWi) and project partners like the Fraunhofer Institut IPA and Stuttgart University. First stage testing revealed the concept performs exactly as intended when transferred from the drawing board (or computer screen) to the real world.

The company plans to develop and deploy the product in major markets over a four-stage process. The first stage has been completed and the second stage is just beginning.

The next level of development involves creating preparedness for serial production and planning the first station networking trials. Parties interested in becoming part of the eventual relay system are invited to participate in this stage.

ebuggy GmbH is the company developing the ebuggy mobility concept, including battery trailer and relay stations for series-production readiness. They will also develop the international ebuggy network with subsidiaries in important automotive markets.

Such importance will be established by the sales of electric cars in various markets, but it would seem a practical answer to range anxiety has been developed in the private sector, removing any need for governmental involvement in infrastructure development – brilliant!

The trailer is so short the resulting overall length of say a Nissan Leaf and the trailer would be about the same as a full-size sedan. Furthermore most electric cars have plenty of torque – so much it is frequently limited electronically. Additionally, the low-slung ebuggy trailer has its own air spoiler to lower its coefficient of drag from the air flowing over the top of the EV.

So will the next thing be a sensor that detects the use of an external power supply and consequently boosts drive torque? This solution to EV range may be the next big thing in EV evolution - the electric vehicle's equivalent to the gas station. If they are smart they'll add squeegees and windshield cleaning solutions to the mix.

Of course, the impetus to innovation brought on by the perceived impact of CAFE, if not the actual letter of the law (with a nod to Aaron Turpen’s analysis), is such that other solutions to the limited range are sure to be forthcoming.

Remember the automotive jump-start packs that charged up at home and then were carried as a back-up battery? As battery technology progresses, EVs could be made with modular or collateral power packs to be added internally when an extra range is needed and removed for daily driving when the weight would simply not be necessary.

The inevitable transition to alternative transportation including electric mobility is only just beginning and the wonders to come may exceed our wildest dreams – researchers have recently teleported a single subatomic particle a short distance. Chances are it will be a long time before such research changes our daily lives – but it will someday.

Aaron Turpen wrote on September 20, 2012 - 1:54pm Permalink
This general idea keeps returning and has some great points. I think an ICE (diesel, greasel, etc) would be better as it would be lighter weight - let's face it, EVs generally have horrible towing capacities - and easier to use with current infrastructure.

Tesla Contemplates A New Strategy for China Retail even As Sales Boom
Jay Leno on Elon Musk & EVs: “I Think He Should Get ... Credit"
END_OF_DOCUMENT_TOKEN_TO_BE_REPLACED