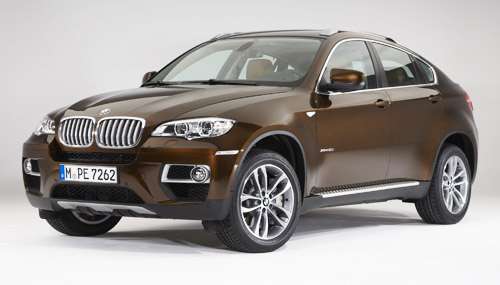 BMW has just released the first images and specifications on the refreshed 2013 BMW X6 Sports Activity Coupe, which will arrive in US showrooms in early spring this year.
Advertisement

SUVs have not always been pretty, though the movement to crossovers began to change this. Given that, BMW’s X6 Sports Activity Coupe is the visual equivalent of the colorful Quetzal bird among a flock of turkey vultures. Few cars of this caliber and capability can claim such unabashed beauty and performance as well. The endless parade of all-wheel-drive vehicles has a dashing new drum major in the X6.

Since it’s release three years ago the BMW X6 has sold 150,000 models worldwide, with 20,000 units in the U.S. alone. It is the SUV for a younger, more affluent driver who wants the ability to move about at will and go wherever life takes them, while traveling in a comfortable, appealing conveyance.

That appearance isn’t static from year to year and the 2013 model sports new adaptive LED headlamps, the first in segment with this feature. Changes in the treatment of fog lamps and three-dimensional front frame, added to the trademark BMW grille and the vehicle’s wide stance give it the no nonsense look of badger with “get out of my way and I won’t mess with your face” in its eyes.

In back, the taillights are comprised of LED light banks, creating a harmoniously glowing signal in the dark of night. The placement and horizontal alignment of the lamps highlights the vehicle’s wide stance and the stylish transition from the rear quarter to the back of the coupe.

The coupe comes with Nevada leather upholstery standard, which is now available in Vermilion. A new Nappa Leather variant comes in Ivory. The standard model is a four-seater, with an additional three-seat rear benchas an available option. The cargo area is 25.6 cubic feet with the back seats up and 60 cubic feet with rear seats folded.

BMW M GmbH, the brand’s high-performance specialists, also offer the BMW X6M with a V8 delivering 555 bhp with other added refinements. This model comes with a 6-speed M Sport automatic transmission and its own special suspension technology.

With the 2013 BMW X6 Sports Activity Coupe refreshed look and features, it would not surprise us to see the brand sell another 60K to 75K units in 2012. This is one we’ll make a point of test-driving as soon as the opportunity presents itself.

Anonymous wrote on January 26, 2012 - 12:27am Permalink
You will hear a lot of people "hate on" this car/truck. They can't afford it, resent those that can and drive Toyota Prius/ Nissan Leaf appliances. If you are worried about mileage and emissions, don't buy one, however if you love to drive and do so assertively, if not aggressively, then buy one now! Remember you can't take it with you and your kids can sell it when your gone.
Don Bain wrote on January 26, 2012 - 4:33pm Permalink
No plans to buy one - Just would like to drive one for a week. Like the Prius too! Going to the Prius c media intro next month - story to come.