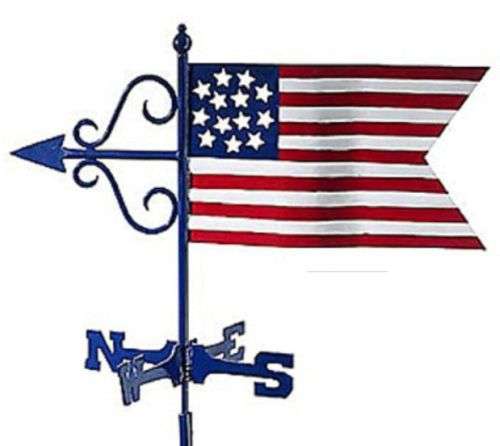 Whether the U.S. auto industry continues to recover or falters again hinges largely upon a more collaborative strategy with supply chain partners, a research team at Case Western Reserve University states in a study titled The U.S. Auto Supply Chain at a Crossroads.
Advertisement

The report is based upon findings of the National Survey of Automotive Suppliers, conducted by researchers at Case Western Reserve as part of the Driving Change consortium, led by the Labor Market Information Offices of Indiana, Michigan and Ohio.

Suppliers in the multiple tiers that serve the nation's automotive manufacturers have played a critical role in maintaining America's middle class for nearly a century. In the face of intense global competition recently, exacerbated by the recession of 2008-2009, auto industry sales fell by 40 percent and two of Detroit’s Big 3 automakers entered bankruptcy.

(NOTE: The U.S. Flag Weather Vane pictured at right is available from Brookstone.)

Examinations of the auto industry have traditionally focused on OEMs and their large tier 1 direct suppliers. For this study, a research team concentrating on smaller firms within the industry's supply chain was directed by Susan Helper, the Weatherhead School of Management’s Carlton Professor of Economics. She focused on those with fewer than 500 employees who do not supply automakers directly.

These smaller firms account for 30 percent of the jobs in the auto supply chain, but are seldom identified as auto suppliers in the current data. Combining multiple databases the researchers have arrived at a clearer picture of the entire and extended industry.

"Throughout our research, we find evidence of two possible futures for America's automotive industry," Helper said. "One future is characterized by collaborative relationships between firms at all tiers of the supply chain, wherein firms share cost savings from identifying and eradicating inefficiencies that they might not have been able to address on their own."

On the other hand, adversarial relationships between the various tiers and partners in the supply chain are likely to impede the industry's progress.

“In this future, instead of developing better products and thinking critically about how to remove inefficiencies from processes that span multiple firms, firms at each level of the supply chain generate profits by squeezing margins of firms in the tier under them. This path is a recipe for industry-wide stagnation," Helper added.

Currently, the study shows large segments of the automotive supply chain are characterized by each of these two scenarios, exemplifying certain elements of both.

It seems few companies are learning the lessons of Toyota’s managerial approach, an integral part of their long history of success. The report notes signs that many first tier firms continue to protect their profit margins by cutting into the margins of their suppliers, instead of trying to build positive-sum relationships. Consequently many suppliers focus on short-term cost cutting and are reluctant to invest in modernization. Only a third have adopted Toyota-inspired practices like involving workers in problem-solving groups, despite conclusive evidence such practices improve performance.

On the plus side, the study found some evidence relationships are becoming more collaborative, with many firms reporting their main customers are now more likely to work with them to reduce costs than before the recession. Further, nearly 20 percent of suppliers have adopted "high road" practices, which include high wages, worker training, investment and empowerment at all job levels. These firms reported 10.9 percent less of a dip in sales during the recession than did firms not exhibiting such characteristics.

The Case Western research was wisely funded by an American Recovery and Reinvestment Act grant through the Department of Labor's Employment and Training Administration.

jamesmoberly wrote on August 19, 2011 - 5:17am Permalink
Say your car has been in an accident, but repaired. Is it worth less than the exact same car that hasn't been in an accident? It's a hot topic, but some say yes. In 14 states, you're allowed to file a claim with your insurance company for that lost value. check out "Auto Insurance Clearance" website to find secrets to reduce auto insurance rates