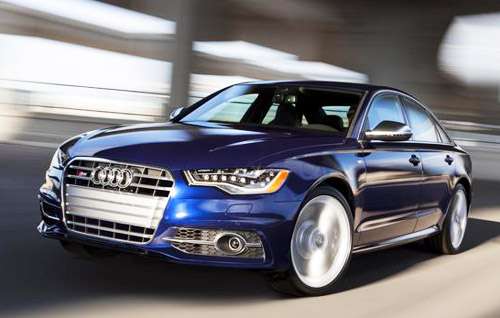 It was early last summer when I saw a beautiful, sky blue cabriolet at the local 7-11. A strikingly lean, male 50-something was refueling the car.

“That’s a beautiful ride.” I said, approaching from the side where no badging was apparent. It was a model unfamiliar to me, as I’d never seen one quite like it before. “What is it?” I inquired.

“It’s an Audi S5,” he said nonchalantly, apparently no stranger to such queries.

“It must be a lot of fun to drive,” I added with envy clearly defining my face.

This interjection is included simply to convey how striking the performance models of the Audi S-line are, especially the convertible models to a confirmed aficionado of such. Having driven recent models of the A4, A6, A7 and A8, loving them all, I can only dream about what it’s like to drive a high-performance cousin of any of those models at present.

If it’s anything like the difference between BMW’s 3 and 5-series and their M-series, it’s got to be – to use a very old, obscure expression – a Jumpin’ Jack Flash!

For 2013, the ever-evolving Audi S6 sedan brings all the exhilarating performance expected, but does it with radical new technologies to maximize efficiency along with design cues that can only add to its mystique.

The 2013 S6 incorporates Audi’s downsizing strategy with no sacrifice of performance in the mid-sized luxury sedan. The new engine replaces last year’s free-breathing 5.2-liter V10 with the smaller V8 engine, yet still offers sporty performance and reduces fuel consumption up to 25 percent.

The technology contributing to this newfound efficiency includes a new cylinder on demand system, allowing the V8 engine to deactivate four cylinders when cruising. The engagement and disengagement of engine cylinders is virtually indiscernible, but the full power of the twin-turbo V8 is always at the driver’s beck and call.

The horsepower of the new S6 is transferred to all four wheels by a seven-speed S tronic transmission. The sure grip of the quattro full-time all-wheel drive system is enhanced with a sport-tuned differential, that actively distributes power to the rear wheels, enabling unsurpassed cornering and acceleration out of a turn.

Audi has gone to great lengths to reduce vehicle weight and the S6’s aluminum composite construction lowers curb weight for greater efficiency and crisp response. Wearing aluminum body panels over a steel frame, a full 20 percent of the svelte S6 is aluminum.

Like most modern premium cars, the Audi S6 features a drive selector that adjusts to personal driving style or ambient conditions, by tweaking throttle response, shift points, steering boost and the degree of adaptive air suspension. The four settings are labeled Auto, Dynamic, Comfort and Individual.

Air suspension sport with variable damping comes standard on the S6 and can lower the body by .39 inches for improved handling at high speeds. The disc brakes are ventilated and distinguished by matt black calipers festooned with S6 logos.

The interior greets driver and passenger with an elegant embrace. The seats proudly wear the S6 logo and envelope the occupants in Valcona leather with diamond stitching. S6 badges distinguish the key, the leather steering wheel with its contrasting stitching and aluminum shift paddles, as well as an instrument cluster specific to the model. Doorsill trims light up with the logo and both instrument and central displays greet the driver with an S6 trademark. A red ring circles the start-stop button, and the shifter sports an aluminum clasp.

Audi MMI Navigation plus with MMI touch is standard and features Audi connect with Google Earth navigation, Google Search via voice recognition, weather, fuel prices, news feeds and a Wi-Fi hotspot for up to eight devices.

Pricing has not been announced but Audi S-sedans come at a premium. Even so, if the S6 is as much an upgrade from the A6 as one might expect, it’s worth every penny.

The Audi A6, A7 and A8 are all impressive vehicles in their own right. As impressed as I was with the 2012 A8, the S8 would doubtlessly trigger sheer automotive rapture.

As my RMAP colleague implied this summer, the Audi R8 V10 can cause an instant epiphany – a call to a higher level of consciousness. For some, four wheels form the foundation of their church, temple or synagogue. Audi drivers are acolytes of automotive ascendancy.