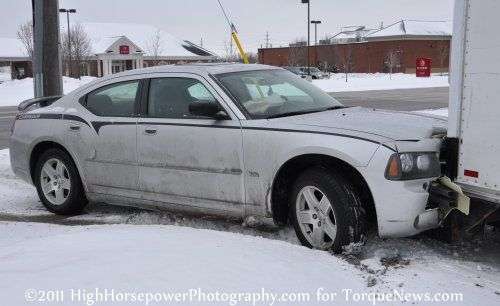 Are you guilty of crashing your car for cash?

Insurance fraud is an unfortunate fact of life, but did you know some people stage auto accidents just to get a little cash from their insurance company in this recession fraught economy? Roughly five percent of British drivers under the age of 35 admit to having done just that.
Advertisement

Out of Britain’s 38 million drivers, that adds up to over 1.3 million who have or would consider staging an accident to profit from their insurance. That many admitted they have or would consider deliberately causing a motor accident, or inventing one. Two per cent said they have already successfully done so. Londoners are the riskiest – a full10 per cent have or are considering committing automotive fraud as opposed to less than one per cent of those living in Wales.

There are three different ways this type of insurance fraud is generally carried out. They can be staged motor accidents in which two drivers conspire to run their vehicles into each other deliberately. Second, a claim can be invented or contrived by creating evidence of an event that never happened. Third, an accident can be actively induced by deliberately causing an uninvolved driver to crash into the fraudulent claimant’s vehicle. Deliberately stopping short when someone is close behind you is an example of this type of claim and all too easily accomplished.

The greatest number of occurrences typically were staged events – some 44 percent. Totally contrived events came in a 24 percent and only eight percent were induced accidents.

The actual downside is the false claim may get you direly needed cash at the moment, but you may end up paying it back in spades over time, through higher insurance premiums.

"We have all been affected by the recession in one way or another, but crashing for cash is not only illegal but wilfully endangers the lives of others,“ said Peter Harrison, car insurance expert at moneysupermarket.com. It seems Brits really are going a step too far this time.

"According to the Association of British Insurers, in 2009 over 2,000 dishonest insurance claims worth more than GBP16 million were detected every week. Our research reveals there are many more motorists causing this type of fraud and getting away with it. Organized motor fraud not only costs the insurance industry, but risks the safety of innocent drivers, passengers and pedestrians. In addition, fraudulent claims cause insurers to increase premiums for honest motorists as they try to recuperate their losses, an unnecessary addition to the spiraling insurance premiums we are currently witnessing.

"Any motor insurance claim proved to involve an organised accident will be considered as fraudulent by an insurer, and is likely to have drastic, long-term affects on your motoring as a consequence. If found guilty, an official "fraud mark" could be added to your license; this will prompt your insurer to void existing cover and probably refuse you cover in the future. In addition, insurers are also likely to pass your details to the police for prosecution," he concluded. "Regardless of how tempting it may seem to get your hands on some extra cash, carrying out organized motor fraud whether it is 'staged', 'contrived' or 'induced', it really isn't worth the risk. After all, it could end up costing you more in the long run."