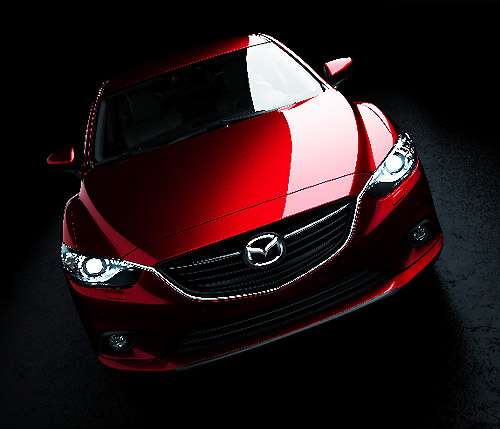 The completely redesigned vehicle is the second in the line to be fully incorporated with SKYACTIV Technology, the brand's terminology for fuel-efficient, performance-oriented vehicles resulting from lightweight engine, transmission, chassis and body structures.

In Moscow at MIAS, a Russian-spec sedan will be showcased, featuring a SKYACTIV-G 2.0-liter gasoline engine and a SKYACTIV-Drive six-speed automatic transmission. The vehicle will also feature the world's first capacitor-based regenerative braking system, which the brand refers to as i-ELOOP, short for Intelligent Energy Loop.

Capacitors can store a great deal of energy for a short time, making them a great addition to regenerative braking technology as the energy created by slowing can be put right back into the equation when you accelerate again. In day to day driving, with frequent braking and acceleration, the system may improve fuel economy by as much as 10 percent.

Additional information on the next generation 2014 Mazda6 sedan will be forthcoming during a press conference on August 29. The full lineup of 2014 Mazda6 vehicles will have a global debut at the 2012 Paris Motor Show, in late September. Markets and specific models will be announced at a later date.

Mazda’s first quarter sales in North America were at nearly 80K units during the first quarter of 2012, a significant 26.4 percent increase over the same period in 2011. The company’s primary markets, however, are Asian and Australian.

Mazda North American Operations is headquartered in Irvine, CA, overseeing the sales, marketing, parts and customer service for Mazda vehicles in the United States and Mexico at over 700 dealers. Operations in Mexico are managed by Mazda Motor de Mexico in Mexico City.