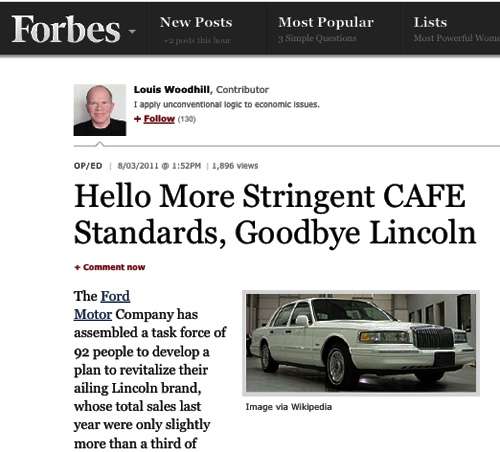 About CAFE requirements and the associated controversy

Will the present administration’s insistence that cars become more fuel-efficient put brands like Lincoln and Cadillac out of business? If it does it will be their own fault. No one is telling them what they can sell in China, where Rolls Royce, Bentley, BMW and Mercedes-Benz are doing just fine.
Advertisement

Pundits at Forbes and Property Mentor Group would have you believe this governmental interference in the “free market” is some giant albatross around society’s neck.

Meanwhile, luxury brands, previously well on their way to oblivion, have been given new life by the burgeoning Chinese Market. Are there any stipulations in the new CAFE requirements on what we build or sell overseas?

Further, there simply is no such thing as a free market – whenever this flag is raised the consequence is open season on the American consumer. if not the world at large. It is a license for the rich to manipulate the marketplace – for without some sort of limited regulation, they do so with abandon.

Woolworth, in the early days of corporate chain stores, gained prominence by burning out his competition. This was in my history books in school. I bet you dollars to doughnuts it hasn’t been taught for years.

The general scuttlebutt during my youth was the Kennedy’s made their fortune running rum during Prohibition. Out of the early captains of capitalism, John D. Rockefeller and Walter P. Chrysler stand out as men who succeeded the American way, taking advantage of their innate gifts and focusing upon their goals to fruition.

So when and where has this free market ever existed? American history is riddled with embezzlement on a grand scale from Tammany Hall to the Savings and Loan Scandal. The relaxation of banking and credit regulations by the Reagan, Clinton and Bush administrations is what lead to the Lehman Shock as bankers, credit companies and insurers went insane with gold fever, embodying the worst of human nature.

“With his new CAFE requirements, Obama is seeking to force ordinary Americans to give up their 14-MPG Lincoln Navigators and squeeze into tiny hybrid cars getting 54.5 MPG,” states Louis Woodhill in a post titled Hello More Stringent CAFE Standards, Goodbye Lincoln.

Excuse me, but CAFE doesn’t tell anyone what to buy. You can still buy an 8-mpg SUV if you can afford to drive one, but the United States of America was set up to provide opportunity to everyone. Government is a necessary evil. Multibillionaires are not. Not everything government does is good – far from it, but not everything is does is bad, either.

Funny thing is people continue to believe such proclamations. How much have the wars Bush started but didn’t finish cost? The fault for the current economy fall on the Wall Street financiers we bailed out. This economy doesn’t run without credit, but if they can’t have the playing field tilted in their favor they just won’t play. That’s what the last few years have proven.

Just like the old argument that if you tax the rich you take away jobs. History disproves this clearly, but you hear the same old lie every two years. Corporations will continue to seek profits no matter what – it is in their nature.

Woodhill uses a 30-year old text, stating that auto brands cannot reinvent themselves to justify his attack on CAFE standards. Is that the best he can do? Automobile manufacturers have been reinventing themselves since day one. Remember when Datsun became Nissan? Mitsubishi is attempting the same feat even now, as are many brands as the market and the world we live in changes.

Bailing out GM and Chrysler was the right response to a crisis the current administration did not create. GM and Chrysler drove themselves down by thinking they could just make big SUVs forever, and the world or the market would never change. These corporations became top heavy and the concessions the UAW won over successive generations began to strangle them.

What movie was it where it was said, “We plan for the next fiscal quarter, the Japanese plan for the next 25 years?” That was Detroit’s mistake. Ford deserves kudos for surviving this period without governmental assistance. They are on an upward trajectory..

The US bailed out Wall Street, too and what did we get in return? Credit reform that made it easier for credit companies to charge extravagant fees and higher interest legally.

“CAFE discourages the production of new Lincoln Town Cars,” the Forbes piece continues. No it does not. I did a story on a third party in Denver who was taking the last Lincoln Town Cars off the line and stretching them to hybrid executive limos. They were absolutely marvelous.

The absence of the Crown Victoria and Lincoln Town Car create an opportunity, just like the ones missed when we didn’t let Wall Street firms that deserved to fail do so. Somebody has to build the new police cruiser and executive limousine, and I’m not sure, but again I’ll bet you dollars to doughnuts, that nothing in the CAFÉ requirements applies to such vehicles.

Woodhill doesn’t think “credentialed experts working for the federal government” should fiddle with the economy, automobiles or free enterprise. Well the CEO’s of companies like Countrywide Mortgage, Qwest and embezzlers like Bernie Madoff, Robert Vesco, Jeb, George and Neil Bush, as well as Billy Sol Estes have all had business positions enabling them to steal billions from the American public. It’s a story that keeps cropping up again and again, like a broken record stuck in a single groove, if you know what that is.

Attending the Nissan Next Innovation Tour, Greg Kowalczyk, a Nissan Information Specialist, related how the new 2013 Nissan Altima has a redesigned CVT that converts 70 percent more power. The result is a nice $20K sedan that delivers 27 highway mpg on a V6 and 37-mpg for a four cylinder. I’m sorry, but that IS progress.

GM and Ford have both filed hundreds of patents for new technology over the past two years. GM has gone from bankruptcy to world dominance, only recently displaced by Toyota, but the margin remains small.

All the manufacturers have been rising to the task at hand. Even Chrysler has produced the absolutely brilliant new Dodge Dart. They hadn’t produced a successful small car since the 80’s. This could foreshadow a major turnaround for the brand known for gas guzzling HEMI engines, but auto brands cannot reinvent themselves – no, huh-uh! Besides, thanks to Chrysler you can still buy a huge, powerful HEMI engine. That simply has not changed.

The new CAFE requirements have done far more good than harm, and those who bitch and moan are the equivalent of former playground bullies who would go home whining because their unacceptable behavior was not encouraged. The so-called credit reform is what should be under the microscope, along with the redefinition of corporations.

Tesla Contemplates A New Strategy for China Retail even As Sales Boom
Jay Leno on Elon Musk & EVs: “I Think He Should Get ... Credit"
END_OF_DOCUMENT_TOKEN_TO_BE_REPLACED