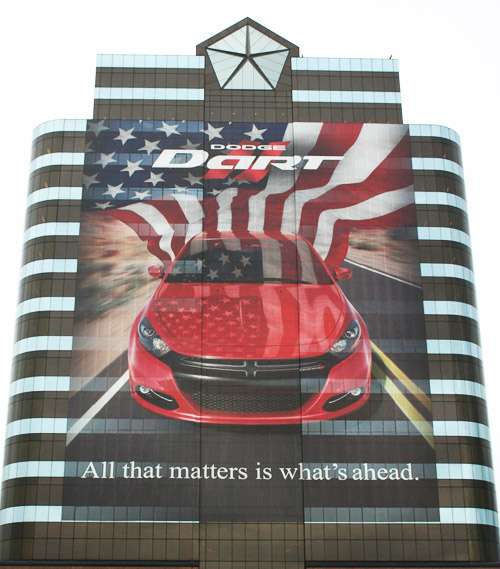 Heralding the arrival of the 2013 Dodge Dart at showrooms around the nation, the Chrysler Group World Headquarters Building has been draped with the small car's image, backed by and reflecting the American Flag.
Advertisement

This is a symbolic reflection of the new Dodge Dart's production at Chrysler's Belvidere IL Assembly Plant, and its three competitive powertrains from Dundee, MI. Boldly stating, "All that matters is what's ahead," the building drape draws upon the company's highly publicized Super Bowl spot titled It's Halftime in America.

"The launch of the 2013 Dodge Dart is one of the most anticipated in our history and represents a tremendous source of pride for the Brand and the company," said Reid Bigland - President and CEO Dodge Brand. "The all-new Dart offers consumers features and benefits never before found in a compact car and signifies our alliance with Fiat."

All that remains to be seen is if Chrysler has finally hit a homerun with a compact car, now that mileage seems to be the number one thing on the minds of consumers. Nearly half the vehicles selling today are compact, high-mileage vehicles and this attempt to create a viable market entry from the automaker could be the true trial of the “New Chrysler’s” future share of the business.

“Approximately 65 percent of these parts are sourced and produced here in the US," according Dianna C. Gutierrez, Media Relations, Chrysler Group LLC
Marketing/Advertising/Product PR, in response to our query regarding the parts content of the compact. "The remaining parts come from various locations around the world."

Chrysler’s sales are reported up over 400 percent, thanks largely to the brilliantly redesigned Jeep Grand Cherokee, providing a propitious portent of things to come. Nevertheless, success by the 2013 Dodge Dart in the compact car segment could bring a full court press to bear on the automotive market, greatly enhancing the company’s overall impact on the modern automotive scene.

“It was not by chance that we chose Belvidere to build the new Dodge Dart,” Chrysler Group Chairman and CEO Sergio Marchionne told employees during a celebration event at the plant last February. “Our decision is evidence of the faith we have in your level of commitment and your passion to deliver great products for our customers. You have been essential in our ability to author a remarkable story of recovery.

“With the help of this dedicated workforce, we are creating a work environment in Belvidere that is committed to quality, and with the flexibility to compete with the best plants anywhere in the world,” Marchionne continued in a press release dated April 28.

The plant’s transformation began during June of 2009, implementing what Chrysler calls World Class Manufacturing – a focus on waste reduction, increased production, enhanced quality, refined safety and providing restored dignity for employees. As a result of the reconfiguration over the last three years, the plant has become one of the safest, most efficient assembly plants in the Chrysler family. Further, just last year the employees submitted more than 20,000 suggestions, implementing over 3,400 projects with the potential to save $32 million per year.

“World Class Manufacturing has transformed the way we run the business and given us a defined route map to follow,” said Kurt Kavajecz, Plant Manager, Belvidere Assembly Plant. “The employees here are committed to the implementation and their suggestions are key to continuously improving the quality of the products built at this plant.”

It is with that renewed pride the employees at the Belvidere plant regard the new building drape of the 2013 Dodge Dart on the Chrysler Headquarters. The car has already been named to Wards 10 Best Interiors List for 2012, as well as being selected as the Most Significant Vehicle during the North American International Auto Show by the editors of Autoweek.

Roughly 200,000 drivers and passengers along Interstate-75 in Auburn Hills, MI will see the 2013 Dodge Dart adorning the Chrysler Headquarter Building each and every day.

It’s a big image for a big product introduction, with a lot riding on its reception, but chances are – given its price point, options for personalization and varied trim levels – along with the number of die-hard Chrysler and Dodge fans still about, the compact car’s chances are pretty good, but it will have to win converts from those now buying smaller cars.