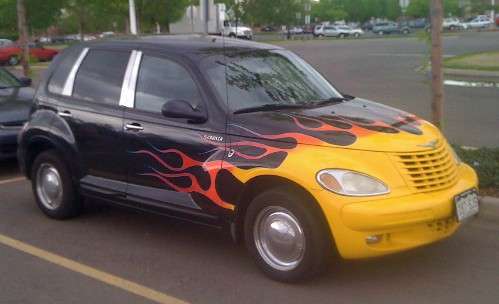 The 10 scariest cars ever made

We don’t mean Hollywood scary cars; we’re talking about scary, dangerous deathtraps, actually cruising the roads somewhere in the past or still on the road today.
Advertisement

In a Halloween vein, we think few things are more fright inspiring than the possibility of being trapped in a flaming car. Our first entry had a handful of design defects that could potentially result in just that scenario. It became known (with a dark sense of humor) as the “Barbeque on wheels.”

1 – The Ford Pinto
Produced from 1971 to 1980, the Ford Pinto embodied the brand’s attempt to stem the loss of market share to popular subcompact imports from Japan and Germany.

Unfortunately, in their haste to get a small car on the market, they cut a few engineering corners, building a car with no real rear bumper and yet another notable flaw.

The result was that a rear impact could rupture the fuel tank and jam the doors at the same time, leaving occupants to frantically roll down windows and climb out the windows while the pungent smell of gasoline assaulted their senses.

Scarier yet was the revelation published in Mother Jones magazine that internal memos from the brand revealed their conclusion is was more cost effective to pay off individual claims instead of fixing the faults.

After considerable public scrutiny and numerous lawsuits, Ford issued a recall to add plastic pieces over sharp objects by the gas tank.

Ford sold over 2 million of the cars and only 27 deaths were attributed to the defects. Perhaps the Ford Pinto was no worse than other small cars of the day as a later legal paper suggests, but simply the idea of a fiery deathtrap terrified the buying public.

Today, you could probably find one, take it to a customization shop, fix its major faults and add some modern safety equipment. Then paint PINTO on big letters across the hood and some flames on the fenders and you might be able to drive on the freeway as cars moved aside to let you by – a lasting after effect of the widespread stigma of the late 1970s.

The Ford we have come to know today is a much changed, much wiser and considerably more safety concerned company than they were back then and that’s a very good thing.

2 – The Chevy Corvair
The Corvair was a brilliant attempt by GM to compete with the VW Beetle, which was gaining immense popularity with young Boomers, thanks to its price under $2,000 and relatively high mileage for the time.

Unfortunately, the ill-fated car became a target of Ralph Nader’s Unsafe at Any Speed expose and subsequent campaign.

According to a source article on MSN.com, an overlooked $6 part could have made the difference between a Corvair that cornered well at high speeds and one with a frightening tendency to grossly oversteer.

We’ve all seen vampire movies in which the undead are dispatched with a stake through the heart. The Corvair, given a sufficient impact, was known to impale a driver on the steering column, long before airbags were even optional.

Furthermore, the heating system in the air-cooled, rear engine compact tended to fill the cabin with carbon monoxide and other toxic fumes from the engine. On top of that it hemorrhaged oil.

“Missed it by than much!” TV spy Maxwell Smart would have said. The Corvair was a remarkable attempt to build a viable American compact, but the auto giant was just beyond their expertise. Today the vehicles are prized collectors items and it’s too bad the course of history threw the Chevy a curve. Otherwise GM might not have needed a bailout a few years back.

3 – The Pontiac Fiero
The name means proud in Italian and fierce in Spanish, but in America it came to mean FIRE! It was built from 1984 to 1988 and actually only 270 incidents of engine fire were attributed out of over 370,000 units sold, but again fire is just plain scary.

In this instance, the fault was not mechanical. It was one of inattention and misinformation. If you drove the car hard, failed to maintain the oil level or literally ran it out of oil, you could break a connecting rod, spewing oil over the engine and sparking a roaring fire beneath the hood.

Having once experienced such an event with a Chrysler K-car, I cannot recommend it. It is a true feeling of total helplessness to know your car’s engine is burning and there is nothing you can do, but step back in case it explodes.

What was the misinformation? The Fiero’s manual said it required 3 quarts of oil instead of the actual 4.5 quarts it really needed. Notably the problem was primarily limited to the 1984 models.

4 – Chevy Corvette and Camaro
These two vehicles, during the period from 1984 to 1988, are on record for killing the most drivers of any vehicles ever made. It’s not due to any defect, except possessing more power than the owners could handle. The models tended to attract drivers with a need for speed and subsequent autopsies revealed (with tongue firmly in cheek) the unfortunate souls all had a right foot comprised entirely of lead.

May they rest in peace!

According to an article on Spike.com, Audi was tormented with reports of sudden acceleration – sometimes forward or maybe backwards, in cars with automatic transmissions. When the cars were shifted from park into gear, they would simply bolt one way or the other, resulting in scores of injuries and deaths.

Like Pontiac and the Fiero, Audi maintained these incidents were a result of “operator error” – implying their customers were too ignorant to know a brake from a gas pedal. Nevertheless, several massive recalls were issued anyway.

CBS’ 60 Minutes aired a story on the 5000’s problems and sales dropped off the charts. Finally, Audi recalled a quarter million cars and dumped the model name altogether.

In contrast, the brand today is building some of the safest, technologically advanced cars on the road, but the ill fated 5000 was truly scary.

6 – The Chevy Vega
The Chevy Vega, produced from 1970 to 1977 was another attempt by GM to cash in on the small car market. It was quite simply plagued with numerous durability problems.

Reportedly, one listener to NPR’s Car Talk called in stating, "My Chevy Vega actually broke in half going over railroad tracks. The whole rear end came around slightly to the front, sort of like a dog wagging its tail."

Notably, I personally owned a 74 Vega GT from about 75 to 78. During that time I rebuilt the clutch and engine twice, but dearly loved it and took it places in the Rocky Mountains it never should have gone.

The Chevy Vega gets the credit for sucking the life out of GM’s reputation and is widely credited with precipitating the auto manufacturers fall from grace.

7 – Chery Amulet
This car is only sold in Asia, but this Chinese sedan received the lowest possible score in the crash safety test performed the European equivalent of the NHTSA, the NPAC, who said, “The test dummy actually had to be dismantled in order to remove it from the car,” according to lawyer J.D. Supra.

8 – Chrysler PT Cruiser
The retro-styled Chrysler was somewhat popular, but in 2002 the car got only 6 out of a possible 16 points from Euro NCAP for frontal impacts. In 2009, the PR Cruiser received poor ratings from the IIHS for side and rear collisions and stood out as the only small car without electronic stability control.

Further, as the picture above implies, the driver’s of the widely known “gutless wonder” may be delusional. Why else would an owner create the physical manifestation of an oxymoron?

9 – Fiat Strada
Sold in the US from 1979 to 1988, the Fiat was just poorly made with floors, engine mounts and suspension that would virtually rust before your eyes. It single-handedly gave robots a bad name in the Western World, as the first vehicle built on a robotic line. It also killed Fiat’s reputation in America for over 20 years.

10 – The hapless Yugo
The Yugoslav wonder was sold in the US from 1985 to 1991 by Malcolm Bricklin for $4,000 even though it wasn’t worth a plug nickel. The truly scary thing about this car is it could strand you in one of those foreboding places portrayed in films like Wrong Turn at any given time.

Another listener to Car Talk posted a report stating, "I once test-drove a Yugo, during which the radio fell out, the gear-shift knob came off in my hand and I saw daylight through the strip around the windshield."

Consumer Reports allegedly stated it would be "hard to recommend at any price.”

If you ever been stuck somewhere very uncomfortable, that’s what's unnerving about this car. If it got you there, would it get you back? If it broke down where would it happen? Would you even want to spend five minutes there?

The popular joke of the day went, ”What comes with every Yugo owner's manual?

A bus schedule, what else?

Other dishonorable mentions include the East German built Trabant, crafted with a plastic body and insulated with newspaper and missing little things like turn signals and brake lights. To gas it up, you had to open the hood, mix gas and oil together as though fueling an old lawnmower.

Speaking of which, the car only developed 18 horsepower, and would barely move if fully loaded with four surly East German occupants, who might have waited 15 years to obtain one of these treasures.

We heard somewhere many of these were driven to West Germany when the wall came down and simply abandoned once there. Were you wondering what could be worse than a Yugo? The Trabant really is, even though there are clubs that celebrate these low-budget vehicles.

We hope you have a very happy, pleasant and safe Halloween.