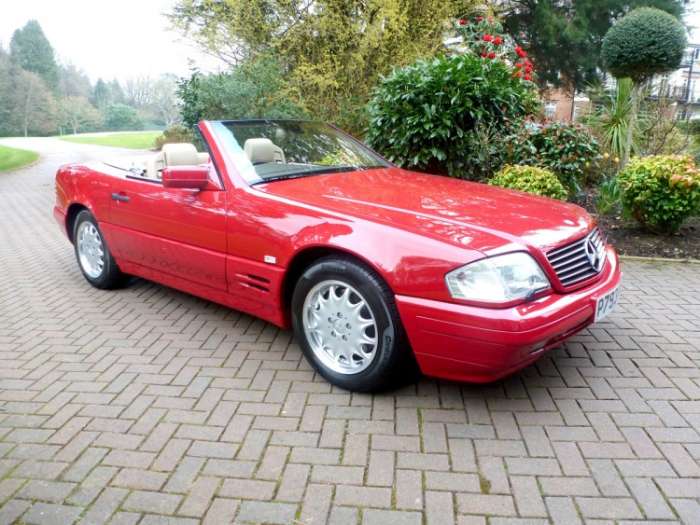 The owner of this Mercedes Benz was given it as a birthday present nearly two decades ago. But the reason she stopped driving it is even more ridiculous than it's absurdly low mileage.
Advertisement

It’s been more than 60 years since Mercedes introduced the original gullwing 300 SL. In that time, the SL has seen five full redesigns. Even without the special doors, the current version looks better than it has in years is actually an excellent luxury grand tourer. But the SL that made the news most recently is from the fourth generation, an R129.

This particular car, a red SL500 from 1996, is currently set to be sold at the Coys Spring Classics auction in a few days. And while it looks to be in great condition, it’s hard to understand exactly why the auction house expects it to sell for around $60,000.

Until you hear how many miles it has on the odometer, that is. Because, despite being a little more than 20 years old, it’s only been driven a total of 81 miles. Ever.

Why someone would buy a loaded convertible and then drive it fewer than four miles per year, the listing doesn’t say. That secret, however, is revealed in a letter from the owner’s butler that verifies the mileage is accurate. As CarThrottle reports, the car was given to its owner as a birthday present, but before she could put even 100 miles on it, she lost the keys.

Apparently, getting a replacement key would have simply been too much of a hassle for the owner. So she did the only logical thing and never drove it again. At this point, you may as well be bidding on a brand new, 21-year-old car.

Thankfully, the seller did take the time to get a set of replacement keys made, so the winner of the auction will actually be able to use this previously keyless car.

Unfortunately, cars don’t only wear out as you drive them. A car that’s sat unused for two decades will likely need a good bit of work to replace items that wear out with age. And while the listing says this car has “been subject of a light re-commission,” it’s not clear what exactly that means. It may sell to a wealthy collector, but I suspect it’s unlikely that this car will see much driving.

And while it would be easy to make fun of the owner for letting a set of lost keys keep them from driving this car (for two decades!), I have to wonder how many birthday presents a normal person gets and then barely uses. Personally, I’ve been given quite gifts that never got used.

Someone who comes from a family wealthy enough to give an SL500 as a birthday present likely has enough money that not driving it is not different than a normal person never wearing a shirt their grandmother gave them.

We’ll see how much this forgotten Mercedes actually sells for when the Spring Classics auction begins this Wednesday, April 12th.