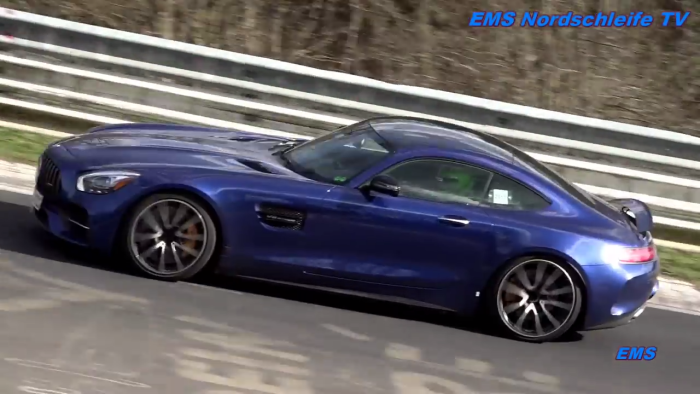 The Mercedes-AMG GT is already a great sports car, but what performance vehicle couldn't use a little more power and better styling? From what we can see here, the refreshed GT is looking even better than before.
Advertisement

In its current form, the Mercedes-AMG GT, the spiritual successor to the venerable SLS AMG, packs a serious punch. Its aggressive fastback styling is an attractive evolution of the SLS’s design. Sadly, the gullwing doors featured on its predecessor are no longer available. Still, you get a luxury sports car that’s almost as quick as the SLS while costing far less. But now that it’s been on the market for a few years, it’s time for AMG to give it an update.

The Mercedes-AMG GT Gets a Refresh

Recently, the YouTube channel EMS Nordschleife TV caught the refreshed GT testing on the Nurburgring. As you can see in the video, it looks completely undisguised. As a result, we now know exactly what it will look like.

Since it’s a refresh and not a complete redesign, there aren’t many radical changes to the GT’s look. The most obvious changes are to the front end, but overall, it looks sleeker. Perhaps most importantly, these styling changes should help differentiate it visually from Mercedes’ grand tourer, the SL.

You can also expect that AMG has done more than tweak the GT’s styling. AutoExpress believes it will also get a power boost to bring the GT in line with the new E63. Currently, the base GT makes just over 500 horsepower, while the E63 makes 563. If that’s true, then it would also make sense that the GT S will rival the E63 S’ 603 horsepower. The two cars use slightly different V8s, though, so don’t expect to see identical numbers.

Personally, I’m a big fan of the current GT. It may not be a true Porsche 911 killer, but it’s a competent alternative. It’s also impressive that AMG was able to create a sports car that puts up performance figures that are so close to what its supercar laid down only a few years ago.

But if Mercedes wants to convince more buyers to forego the 911, adding more power and offering a cleaner design is arguably the best way to do so. Of course, if you’re a die-hard manual transmission enthusiast, no amount of tweaking, refreshing, or facelifting will make the GT an option for you. Mercedes hasn’t shown any signs of reversing its decision not to offer a manual on the GT.

Of course, if Mercedes did decide to offer a manual transmission option, it would probably mean slower lap times. And the AMG GT R is already one serious track monster. Assuming it gets updated along with the rest of the GT lineup, we might be looking at a sub-seven-minute Nurburgring time.

In a car that quick, the lack of a clutch pedal suddenly doesn’t seem like that big of a deal.