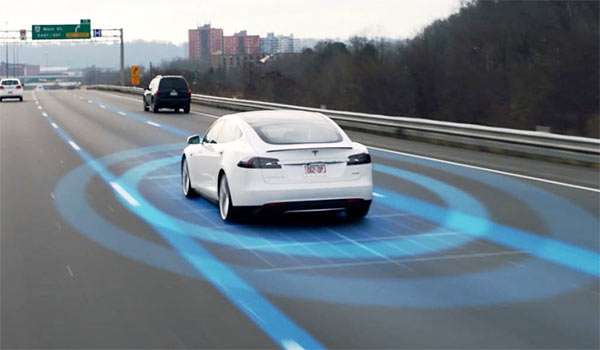 A recent video uploaded to Twitter shows footage from the dash cam of a Tesla vehicle engaging autopilot and predicting an accident just before it happens.
Advertisement

The dash cam video was uploaded to Twitter by Hans Noordsij who owns a Model S in the Netherlands himself, shows the vehicle beeping and the car applying its emergency braking system just before the accident happened. The vehicles were travelling down the A2 highway in Eindhoven, Netherlands where the vehicle in front hits the rear of an SUV. Tesla's autopilot kicks in, just before the accident and was amazingly able to recognise the incident two cars ahead. The emergency braking slowed the vehicle and then Noordsij was able to apply the brakes himself for a complete stop. Thankfully, nobody was injured in the incident.

Original video, authorisation from the owner. Essential, no one could predict the accident but the radar did and acted by emergency braking. pic.twitter.com/70MySRiHGR

Tesla's autopilot features have been rolled out this year and will see significant upgrades in 2017, luckily for this driver. The updates were incorporated into the first-generation of autopilot hardware. 'The most significant upgrade to Autopilot will be the use of more advanced signal processing to create a picture of the world using the onboard radar,' Tesla wrote in a recent posting online.

Original video, authorisation from the owner. Essential, no one could predict the accident but the radar did and acted by emergency braking. pic.twitter.com/70MySRiHGR

This first-hand footage of the autopilot system saving a vehicle and potentially the driver will be good news to the company as Tesla have taken some stick in the press for releasing its beta version of the autopilot before completion. Tesla gave directions to their vehicle owners to still keep their hands on the wheel with the early versions of the autopilot. The company has stated that the software will eventually make a vehicle safer than driven by a human and should reduce the 1.25 million global traffic accidents which happen each year. The software and hardware are still needs millions of miles, but if this video is anything to show, it's on the right track.

Tesla's hardware and software is in continual development with them switching from a camera view of the road to a radar system to see more of the road environment around them. Tesla also uses a database to location tag approved radar objects and will slowly brake if any anomalies are detected. If a 99.99% chance of a collision is imminent than the car's emergency braking will fully engage.

If nothing else, the video clip clearly shows the potential of the autopilot system and almost seems one step ahead of a human driver. I'm guessing that the incident in the above video could have turned out far different if the autopilot hadn't engaged.