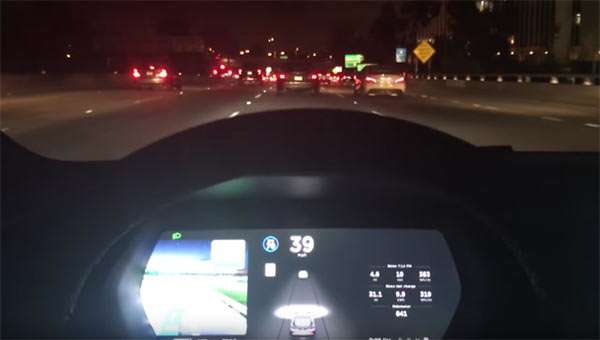 Since Tesla started updates to the Autopilot 2.0 hardware at the beginning of the year, vehicle owners have been seeing rapid improvements to the whole system.
Advertisement

The initial updates went out to around a 1,000 vehicles which was part of the Firmware 8.0 (2.50.185) release which steadily rolled out aspects of the Autopilot system, many still in beta format such as the Forward Collision Warning, Autosteer and Forward Collision features. It was up to each individual vehicle owner to engage the new facilities via the software's release notes with Tesla were being ultra-cautious, especially with facilities like Autosteer which only allow low speed driving at present. The functionality makes use of various cameras and ultrasonic sensors around Model S and Model X vehicles which gives a 360° view of the car and its surrounding area.

In the release notes for the enhanced Auto Pilot Tesla state, 'these features operate on a new hardware and software platform. Therefore, their rollout will be measured and cautious until we have generated confidence across several hundred million miles of real-world usage. Enhanced auto pilot will become better over time as this experience is gained and corner cases are addressed. In the meantime, it is particularly important that you remain vigilant and in control when using driver assistance features.'

Initially, there wasn't much autopilot functionality with the update, but as the whole system gathers more mileage data, functionality seems to be trickling through. According to Model S owner Gary and his website it wasn't until a few days had passed and driving miles clocked up that the early stages of the Low-Speed Autosteer started to appear. As of writing, the enhanced Auto Steer can be engaged while cruising by activating cruise control twice, which can detect lane markings and follow the car in front. Screenshots from the updates say, 'in general, you must be travelling at least 18 mph to engage auto steer. When a vehicle is detected in front of you, you can engage auto steer if you are travelling at least 5 mph, or if you're already using cruise control. In this release, auto steer is available only below 35 mph. Once you've exceeded the speed, auto steer will no longer be available.'

The updates will continue to trickle through and become more usable as Tesla engineers gather more mileage data which will essentially continually update the autopilot to as many driving conditions as possible and ultimately become safer than being driven by a human driver. For those who think the Auto Steer will leave the driver to their own devices, the on-screen prompts also come to the drivers aid. The car warns a driver that if they have not taken the needed action they will hear a warning chime. If they still don't take action they will hear a continuous chiming and the vehicle will begin to slow down. Further to this if the driver does not take action, the car will come to a complete stop and the hazard lights will turn on. Auto steer will also disengage and remain unavailable for the duration of the drive if you repeatedly ignored the autopilot prompts.

Alters the roller should expect constant updates in the coming weeks with software becomes more refined and the functionality fully engaged. Stay tuned for future updates.