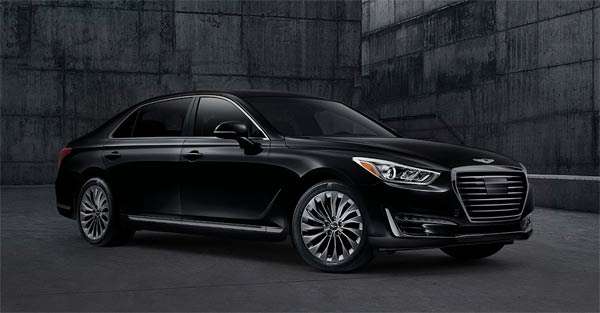 The Genesis line of vehicles from Hyundai is lining up to take on the big boys in the luxury car market and here's why.
Advertisement

Genesis is the luxury car from Hyundai, the same as Lexus is to Toyota and to stay competitive in this lucrative sector of the market, the Genesis brand has to come up with something special especially with the likes of Mercedes-Benz, Jaguar, BMW and Audi having a more solid bedrock in the market. Admittedly, charging as much as the other luxury car brands when the name is associated with Hyundai may be a bigger sell than most, but if you take the latest generation of Genesis vehicles on face value, they have a lot in store that appeals.

The Genesis G90 is the first that will head up a line of executive vehicles which will eventually include other coupes and SUV's. The base model comes with either a 3.3L Twin Turbo V6, 3.8 L V6 or a 5 L V8 through an eight speed automatic transmission. The overall looks of the G90 are more appointed and stately than you first would expect, with its slatted grille and tidy detailing which gives it presence. The winged badge on the hood denotes that this is not a Hyundai high-end model, but a luxury brand to itself.

Back to the engine department the 3.3 L V6 is said to have a good mid-range and potent top end, which could rival its V8 option, with the 3.3 T with its integrated turbo and wastegate for increased responsiveness seems to have no lagging in the turbo. 0-60mph in around 6.2 seconds with 365hp with 375lbs. ft. of torque is a confident drive with much flexibility. The nice thing here is the eight speed automatic gearbox sends 90% of the power to the rear via its four-wheel-drive HTRAC, with 40% going to the front-end for traction and stability and the hundred percent for its Eco mode. All this rides on MultiLink suspension and adaptive dampers which give a firm and luxurious ride.

The interior and standard equipment of the 2017 Genesis G90 seem to be one of the big plus points for the Genesis and with tech heavy competition like the BMW 5 series and Mercedes-Benz, Genesis have thrown everything in here like the 12.3 inch touchscreen infotainment system and satnav, dual zone climate controls, autonomous emergency braking, blindspot detection, adaptive cruise control, automatic lights and wipers and 360° cameras as part of the package. You get plenty of high-end leather and modern surfacing to give you that air of luxury and even a little analogue clock in the centre of the dash to bring an air of old school.

The Genesis G90 is definitely up there with its competition, especially with providing all features as standard, but its biggest hurdle is going to be the immediate association with its more economical Hyundai brand. If you take the car at just face value, it could just be the luxury car 2017.