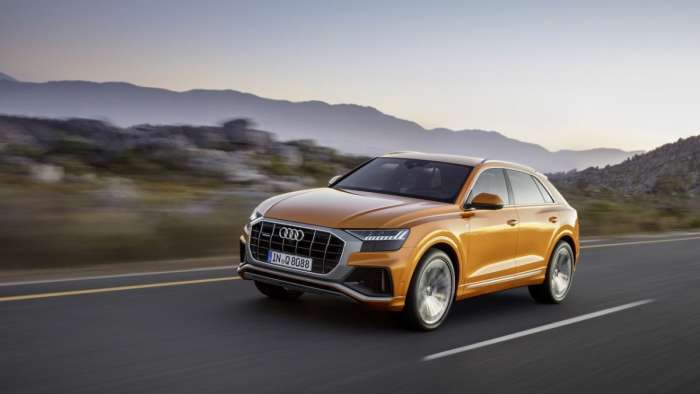 When Is A Coupe A Coupe? Is It Two Doors Or Four Doors? And, Here’s Audi’s Q8 Pricing, Too

So, Audi announces the pricing for its Q8, five-door coupe and I have to scratch my chin: what exactly is a coupe? Doesn't Audi sell several coupe models such as the two-door TT? So, if it sells real coupes, how can it call a five-door crossover a coupe? It's a strange one, I'll admit.
Advertisement

Here’s something that positively captivates me: calling a four- or five-door vehicle a coupe with a straight face. More and more, it is happening in the automotive press as folks, who should know better, pick up on the phraseology.

Could I Be A Luddite? Hmmmm

Okay, so maybe this makes me a Luddite of sorts, but I think if you are going to talk about vehicles that are coupes you should make sure that the cars – or SUVs – have two doors, one for the driver and other for the passenger, and no more.

For example, just this weekend, Audi announced the pricing for the Q8, its range-topping vehicle. And, in its intro piece, Motor1.com said this:

“Audi’s new Q8 is a first for the German luxury automaker. Here's a look at the 2019 Q8. It’s adopted the five-door coupe aesthetic pioneered by the BMW X6.” Here is a look at what the X6 has to offer. Further, it said the Q8 “looks long and low, thanks to its sloping roofline. However, it has nearly the same dimensions as the Q7.” Here's a close look at the Audi Q7.

Now, let me get this straight. If a vehicle looks like a sleekly contoured crossover and it has the aesthetic of a coupe, it is a coupe. Wrong, it can’t; it won’t, no matter how many times you say otherwise. The Q8 is still a five-door crossover, and even though has a long, sloping roofline, it doesn’t change the facts. A five-door cannot be a coupe and coupe certainly can’t be a five-door.

Look at the Audi TT, and you will see what a coupe looks like. Go ahead and Google an Audi TT we’ll wait for you. Have you seen it or do you need more time? We’ll give you a bit more time.
Time’s up on this; did you see the TT? There’s the left door, and there’s the right door. There is no door 3, or door 4, or door 5.

Now, I don’t think I am too picky about this, do you? And, maybe Audi will hear about this small protest and will call the Q8 by its real name or body type: a five-door, three-row crossover.

Well, enough of that because you probably want to know what the price is for the entry-level Q8 in Premium trim; it’s $67,400, which, you have to admit, is quite a sum for an “entry-level” vehicle. Still, the five-door Q8, since it is part of the top-of-the-line model group, is worth that money as there is plenty of technology and luxury.

For The Money You Can Expect Luxury

For the money, you expect and receive such luxury features as Audi’s pre-sense city system. The system detects pedestrians, vehicles, or cyclists in the vehicle’s path. If it senses there might be a collision the pre-sense system starts braking. The system works at speeds up to 52 mph.

If you are looking for more safety, Audi doesn’t disappoint as you can equip the entry-level Premium Q8 with adaptive cruise control; intersection assist; traffic sign recognition and turn assist.

On the inside, the Q8 shows off its technology with Audi’s MMI touch respond system. It features a 10.1-inch infotainment and navigation display at the center top of the dash while an 8.6-inch lower display presents the climate control screen.

As has been pointed out, if you are a fan of the Audi A8 then you will recognize the interior design. The Audi A8’s interior features the automaker’s second-gen virtual cockpit. Apple CarPlay and Android Auto are standard.

The next step in trim moves from the Premium to the Premium Plus, priced at $71,400. The top trim is the Prestige at $76,550. Both trim levels add more standard safety and entertainment equipment. Standard on both trim levels, for example, is the Bang and Olufsen Premium 3D Sound System. Prestige customers can upgrade to the 19-speaker Bang and Olufsen 3D Sound System. Options here include a full-color heads-up display on the Prestige level trim.

The same 3.0-liter turbomotor V-6 powers all Q8 trim levels. The transmission is an eight-speed automatic. A mild-hybrid – 48-volt system -- the engine cranks out 335 horsepower and 369 pounds-feet of torque. The automaker says it will run from 0 to 62 kph in 5.6 seconds, which is pretty good for a 4,700-pound SUV. The line comes standard with Audi’s Quattro all-wheel-drive system. The Q8 goes on sale here next year, while it will debut in Germany and Europe in the third quarter of 2018.