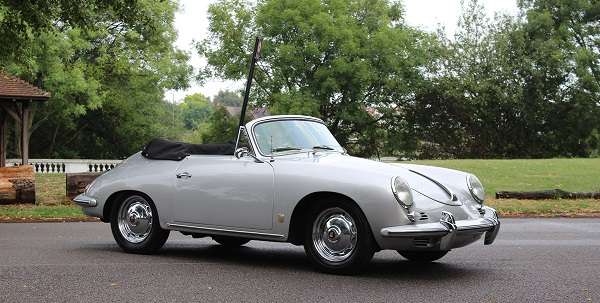 Well-Known Porsche Vintage Racers To “Drive Toward a Cure”

Well-known vintage Porsche racers will battle it out in April in a lifestyle California road rally whose primary goal is to raise awareness of Parkinson's Disease.
Advertisement

A pair of classic Porsche racers will be helping to “Drive Toward a Cure” in late April. Two 1960 Porsche 356 Super 90s are set to take part in the “Drive,” a lifestyle rally event. They are there in support of the world-renowned Michael J. Fox Foundation and the Parkinson’s Institute and Clinical Center in Sunnyvale, Calif.

The “Drive” is focused on increasing public awareness of the rigors of Parkinson’s Disease. To do this, Southern California-based co-drivers Richard Cupp and Steve Schmidt, as well as Northern California vintage racer Max Jamieson have entered the Porsches.

They will battle it out on the scenic roads of California as part of a not-for-profit lifestyle rally. It is a pleasurable way to have the essence of driving while supporting a great cause.

Drivers will tackle pieces of both scenic roads and some of the most challenging driving routes in northern and southern California during the event. Also, entrants will have access to some of the world’s best car collections.

The weekend is equally challenging and rewarding as the driving competition is tempered by receptions and wine tasting in the Paso Robles wine country of California. Registration is open at www.drivetowardacure.org.

This is the inaugural event of the “Drive Toward a Cure.” There will be two competition challenges, one beginning at the world-renowned Blackhawk Museum in Danville, Calif., and the other starting at the regarded Petersen Museum in Los Angeles. Other private collectors are opening their collections exclusively for participants.

Each entrant in the rally will consist of a driver and navigator. They will drive carefully planned routes on California’s backroads and byways, and they have the chance to participate in “special stage” driving tests. The tests will give entrants to take their explore their vehicle’s limits while competing in a controlled, safe environment.

The first entrant of more than a dozen expected to enter was Dick Cupp, driving his Porsche 356B Super 90. “I’ve been supportive of Parkinson's causes for the past several years and was attracted to this event in particular by the attention it gained in an automotive publication,” he said. “I’m a former vintage racer, and several of my pals are still enjoying themselves on the track today – but I’ve challenged them to share in this rally and take another type of journey with me.”

Fellow vintage racer Max Jamiesson is a longtime friend of the duo. Jamiesson’s Super 90 was also fabricated by Schmidt. He will be starting at the northern end of the circuit at Northern California’s Blackhawk Museum. The three are planning a meetup in Paso Robles.

Deb Pollack, the founder of the “Drive Toward a Cure,” said the goal of this rally is to elevate awareness of Parkinson’s disease through a dynamic driving experience that encourages participation of all levels of car enthusiasts.

“I’ve been a car fan by nature and a brand champion by trade within the luxury automotive realm for many years – and at the same time my heart has remained philanthropic – so it seemed only fitting to align this type of cause-related effort effort to our industry of car aficionados.”