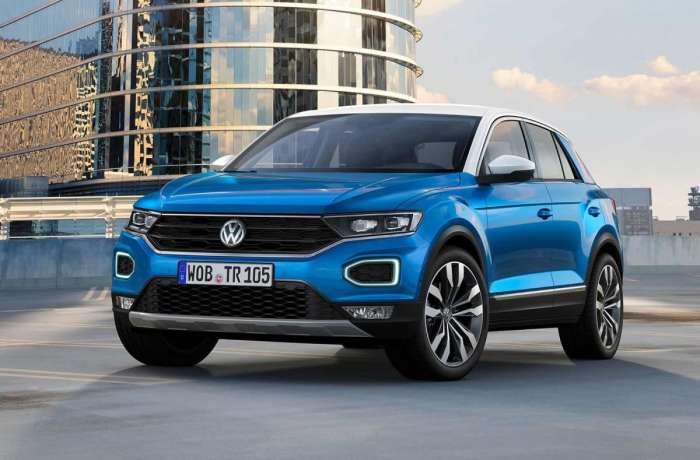 After telling the automotive press that the T-Cross was not heading to the U.S. market, it seems that VW still wants to have a low-end subcompact crossover/SUV. Though there is little information available now, what we do know indicates that the new vehicle will be slotted below the Tiguan, but will stlll be longer than anything available in Europe.
Advertisement

Although the T-Cross won’t visit this side of the pond, at least that is the word from VW, the automaker has plans to introduce a subcompact-sized SUV in the next year or so. It will join the three-row Atlas VW's Atlas Line Has Many Features. and the intermediate-sized Tiguan VW Tiguan Is A Smaller SUV. in Volkswagen’s lineup. The new model, according to a VW rep, will be specific to the American market.

VW To Slot It Under Tiguan

Volkswagen is lining up the new model to fit below the Tiguan, putting it in the subcompact-crossover segment. The new model, according to Car and Driver, will compete against the Honda HR-V Honda HR-V Competitor From VW? and the Jeep Renegade. New VW May Challenge Jeep Renegade.

Like other models in the VW range, the new subcompact-crossover will likely use the ubiquitous MQB A0 platform as its starting point. Car and Driver speculated that a turbo four-cylinder would power the new line. The probable transmission will be a double-clutch seven-speed which the automaker is using as the tranny in most of its lineup. And, the new model will likely be available with all-wheel-drive, if it is to compete with the HR-V, Renegade or one of the many others in this hotly contested segment.

Here is another thought about the potential subcompact VW crossover. It will probably arrive in the 2020 model year. The reasoning on this is solid because VW has announced the vehicle’s debut a year later.

So, how long will the new model be? As noted, neither the recently announced T-Cross nor the T-Roc VW T-Rock Is A Competitive Model. will be shipped to this side of the Atlantic because, according to VW, each isn’t sized correctly for the U.S. market. For example, the T-Cross, based on the Polo, a hatchback that is smaller than the Golf. The T-Cross is about 162 inches long, almost two feet shorter than the Tiguan. It is also considerably shorter than other vehicles in the subcompact crossover class here. It is also nearly two feet shorter than the Tiguan.

The T-Roc, though it is similar in size to the Golf, won’t appear here, either. Though it is 166.7 inches, VW believes it is still not big enough for this market. The Tiguan, on the other hand, is 185 inches long. The new subcompact crossover will be below the Tiguan in the lineup.

Likely To Use MQB Platform