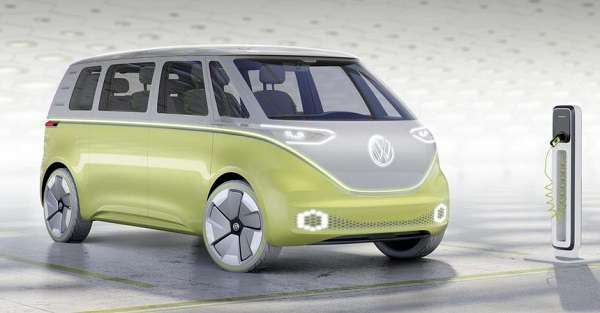 Volkswagen unveiled its new I.D. Buzz concept car at the Detroit Auto Show. The lines show the Buzz takes cues from the past, but it is also very much in the future.
Advertisement

Though it takes its styling cues from an icon of the 1960s, VW's Microbus, the automaker's ID Buzz is anything but history. Unveiled last week at the Detroit Auto Show (aka the North American International Auto Show), VW's “back to the future” concept vehicle employs big battery capability and two powerful electric motors that turn it into a tough all-wheel-drive high-capacity minivan.

The I.D. Buzz uses a floor-mounted 111-kWh battery that gives the microbus 369 horsepower and a range of up to 270 miles. The Buzz shares the Modular Electric Drive Kit employed in the compact I.D. hatchback concept unveiled at the 2016 Paris Auto Show.

Both concepts, the I.D. Buzz, and the hatch feature VW's rather unique I.D. Autonomous driving system. When the fully autonomous driving mode is engaged, the squared steering wheel retracts into the instrument panel, an interesting feature.

When the vehicle is in fully autonomous mode, the front seats can swivel to the rear, while the seatbacks of the three-row microbus fold flat to form tables. The third row of seats converts to a bed like configurations of the original, iconic Microbus. Honestly, said some who have seen the concept, the cabin looks more like a lounge than a more traditional van, especially when you take into account the unique seating arrangements.

VW is considering two powertrain configurations. The first is a rear-drive vehicle using a single 268-horsepower electric motor that draws its power from a single 84 kWh battery pack. In the second, the Buzz would use the more powerful, all-wheel-drive two-motor configuration. Power from the larger battery pack is electrically distributed between the wheels. According to VW, the Buzz can move from 0 to 50 in 5.0 seconds, showing the power of the dual-motor configuration. The battery pack can be recharged to 80 percent in 30 minutes using a high-energy recharging system.

The driver of an I.D. Buzz will experience wholly updated layout that favors a touch-sensitive steering mechanism, an augmented reality heads-up-display, and a large, center-mounted tablet/information screen. The tablet can be detached. This configuration enabled the design team to put more space between first-row seating and the instrument panel. Space was increased by nearly six inches.

There's little doubt that the I.D. Buzz is a direct descendant of the Microbus. The overall styling is lifted almost entirely from its iconic ancestor. However, there are many modern touches including LED lighting that reacts to the driver's presence. Placed at the four corners, the wheels give the Buzz a wide stance. It is a long vehicle built on a 130-inch wheelbase.

Frank Welsch, head of development for VW's board of management, said that the I.D. Buzz “points the way to the future. This concept vehicle is the world's first electric multi-purpose vehicle to be equipped with a fully autonomous driving mode. It carries the feeling of freedom of the [original] Microbus to a completely new era of mobility.”

The I.D. Buzz's unveiling at the show was done to increase chances it would be produced. Klaus Bischoff told Automotive News that an SUV is in the works based on the MEB platform. The SUV is due after 2020.