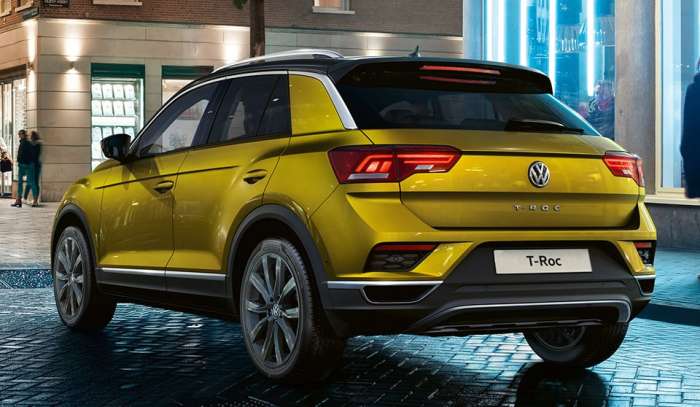 Volkswagen is about to leave U.S. gearheads looking at the store window as the automaker introduces a performance version of its Europe-only performance crossover SUV the T-Roc R. Rumors have abounded that the automaker had been planning something for Geneva next month. This was it.
Advertisement

If you know one or two heavy-duty enthusiasts or if you happen to have a super network of car spies at your disposal and if you happen to live near the Nurburgring circuit, you can often find versions of performance vehicles that are in the last stages of testing. These vehicles haven’t been on the street yet, but, they are nonetheless ready to go.

VW Has Been Testing The T-Roc R At The ‘Ring

This has been the case recently at the ‘Ring, where versions of Volkswagen’s performance crossover SUV T-Roc R have been in the works for weeks. VW will unveil it next month at the Geneva International Motor Show.

The folks at The Motor Authority first spotted the test mules last fall. The versions they found were in the forms of “thinly veiled” concepts. In other words, T-Roc R is ready to go; customers in Europe and other parts of the world will probably be lining up for it, once the performance SUV moves from concept to official. Spy Shots Of Troc R at Nurburgring

As we (Torque News) have noted in the past, when talking about vehicles like the T-Roc, neither it nor any cars developed from it, like the T-Roc R performance crossover SUV, won’t be available in North America.

U.S. To Miss Out On A Tuned-Performance Suspension

As The Motor Authority noted this situation is a “shame because there might be a 2.5-liter turbocharged inline-5 under the hood.” This change would make any gearhead out there quite happy. Indeed, there is already a version of the powerplant that U.S. consumers may be able to purchase, the RS 3 and the TT RS. Both vehicles share the mill that will power the T-Roc R. The engine cranks out 400 horsepower.

For those who will be able to obtain the T-Roc R, it will have unique front and rear fascias. The design and the ride and handling package will be more aggressive than that found on the T-Roc. Speculation is that because Petter Solberg, World Rallycross champ, has been doubling as the development driver for this program, the T-Roc R will probably have a performance-tuned suspension. This is an interesting development because the TT is normally a tightly wound affair that features excellent road manners with great handling. The ride is rather stiff. So, given Solberg’s input, the handling is improving on success.

And, while it is certain the T-Roc R won’t be headed to the U.S., what is less certain is where its mechanical package may end up. It could easily land here if Audi decides to bring another vehicle that uses it and is sold in Europe to the U.S. Indeed, the rumor mill has been going crazy lately with predictions that U.S. drivers will be able to avail themselves of the T-Roc R mechanical package in the next generation Q3 RS. Next Generation of Q3 RS May Be Sold In U.S.