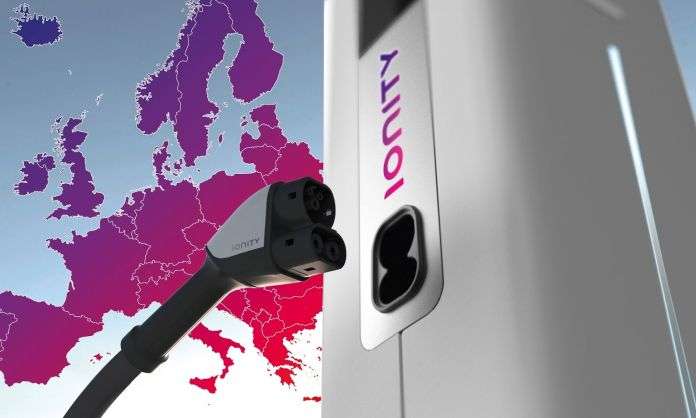 Four major European brands, including Volkswagen, have joined together to form a new high-speed electric vehicle charging network. Called Ionity, the new network announced plans to have 400 charging stations in place by 2020.
Advertisement

Every day, it seems, the drumbeat surrounding electric vehicles quickens as one make announces that it will be all electric by 2020 and another makes the announcement but pushes it by a year, and still another declares that it is rolling out not only electrics but also plug-in hybrids, full hybrids, and mild hybrids. Ultimately, all of them promise that by some date – usually around 2025 – that they will be going all-electric.

Underlying the all-electric vehicle world is the implicit assumption that there will be a worldwide charging network in place that will enable people to use electrics as easily as they do gasoline-driven vehicles, where the system of gas stations, built out for more than three generations, is ubiquitous. There’s a station virtually on every corner or several along every expressway or autobahn. To that end, several brands – Volkswagen, BMW, Daimler, Porsche, Audi, and Ford – announced the establishment of a High-Power Charging (HPC) network, based on a pan-European standard with 100 stations by 2018 and 400 by 2020. Ionity backers include Porsche and Audi

Subsidiaries join their brands in roll out

The major brands will be joined by their subsidiaries, as well. Volkswagen Group’s Audi and Porsche brands joined the effort announced on Friday. The network has its headquarters in Munich. The first 20 stations are planned in Germany this year, as well as in Norway and Austria. The stations will be about 75 miles apart and will run in partnership with Tank & Rast, Circle K, and OMV.

Growth plans call for 100 stations in 2018. Each location will allow the drivers of different car brands to charge at the same time. Each site will use the Combined Charging System, a European standard, to cut charging times, compared to existing systems.

Ionity, in a statement, said the system isn’t tied to specific brands so it should help to make electrics more appealing to drivers. Each charging point will have a capacity of 350 kW.

Ionity’s chief Michael Hajesch said that the first “pan-European HPC network” will plan “an essential role in establishing a market for electric vehicles.” He added that each fast-charge station would offer digital-payment capability.

While many localities have welcomed electrics as a solution to emissions and air quality problems when you get far beyond the limits of those regions drivers become nervous and electric popularity dips. Drivers are afraid they will be unable to get to their destinations if they make the switch to electric from convention fuel sources. Looking for an electric vehicle? You can afford more than you think!

However, as Tesla makes more and more news as it becomes the market leader, established brands are fighting back by teaming up with others to ensure that their brand-specific electrics can get on the road and stay there by hooking up to a station in the High-Power Charging (HPC) network.