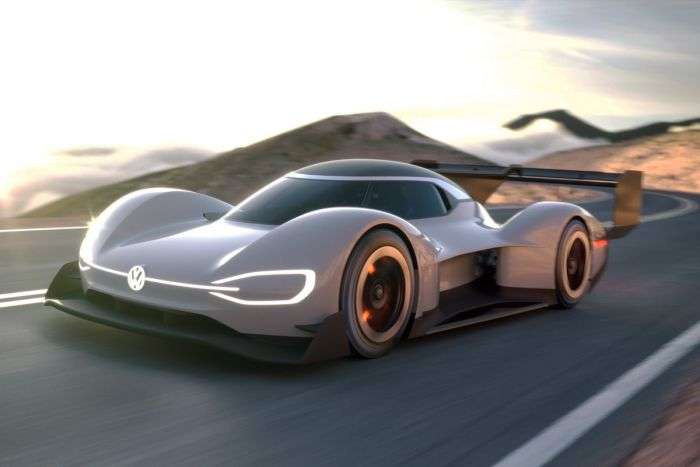 Volkswagen on Sunday unveiled its electric supercar, the I.D. R, which has been tasked with setting a new Pikes Peak Hill Climb record. Roland Dumas, current champion, is piloting the record-attempting vehicle.
Advertisement

It’s amazing exactly what Volkswagen is doing with electric racers. The automaker is turning its electric race cars into beasts. For my money, they are creating a class of electric race car that will challenge many notions about just what an EV can do.

For example, the automaker’s Porsche subsidiary is massaging its 913 Hybrid Evo in what may be an attempt to set the one-lap record at the Nurburgring’s Nordschleife – its northern section. The 1,100-horsepower hybrid uses a turbocharged V-4 internal combustion (IC) powerplant, that delivers about 745 horsepower to the wheels. It then uses dual-sourced electric motors for the rest. Here's a closer look at the I.D. R and other VWs.

Interestingly, Porsche already holds the record lap tie for the Nordschleife at 6:11. The 956 that set the record in 1983 did it during a qualifying run. By comparison, Porsche’s fastest street-legal 911 ran the Nordschleife in 6:45 or so. There has been no official commitment to the record lap challenge from VW. But, there are hints that the new 913 Hybrid Evo will attempt a new record lap before this year’s Nurburgring 24-Hour endurance race. The hints include a new video about the 913 Evo. Then, there is a report that the 913 Hybrid Evo will be available at the track a day before the endurance race.

And now, Volkswagen has jumped onto the monster bandwagon as it works the kinks out of its I.D. R Pikes Peak racer. Indeed, the racer was officially unveiled on Sunday after a series of teasers going back at least six months. The early teasers had very little in the way of real information, in my opinion. However, Volkswagen has made up for the dearth of info with an avalanche now.

On its unveiling, we learned the new racer will be putting a lot of electric power to its wheels. The zero-emission racer is running two electric motors in series that have a combined power output of 680 horsepower. Because electric motors are on-off, power is available instantly as the I.D. R puts 480 pounds-feet of torque to the driving wheels.

Looking at sheer numbers, the Evo outclasses the I.D. R by more than 400 horsepower. If the two racers were to go at it head-to-head it would seem that the more powerful Evo, though a hybrid, would run circles around the VW. But, the I.D. R weighs in at 2,425 pounds, making it lighter than the Evo, so the VW should be the one running circles around the Evo. And it does! The I.D. R catapults from 0 to 62 – 100 kph – in 2.25 seconds, making it quicker than Formula 1 and E racers. VW hasn’t discussed the top end.

The key for the specialized I.D. R is that it was developed especially to take on the “Race to the Clouds.” Because there are 156 corners to maneuver through as it blazes toward the summit, torque far more important than sheer power.

The I.D. R is the real deal. It is both a concept and a real racer fulfilling that concept. According to Motor1, the engineering team chose to maximize the I.D. R for out-of-the-starting-gate performance, not range. To that end, specialized maximum output batteries were developed using lithium-ion technology. To keep the charge up so that the I.D. R can move briskly along the track, VW has included a specialized electricity recovery system that should enable the racer to regain about 20 percent of the electricity it uses.

The I.D. R will have its official baptism of fire when the flag drops on the June 24 Colorado Springs Hill Climb. The track is one of the toughest challenges in motorsports. The 12.42-mile track starts at nearly 10,000 feet on Pike’s Peak. It climbs roughly one mile (4,740 feet) on asphalt. Defending Pikes Peak champ Roman Dumas will be piloting the I.D. R. Dumas is seeking a new record for the fastest electric vehicle. The current record is 8:57.118.

A long time between record attempts

The last time VW sought the electric record was 31 years ago. At that time, a twin-engined, all-wheel-drive Golf didn’t finish the event.