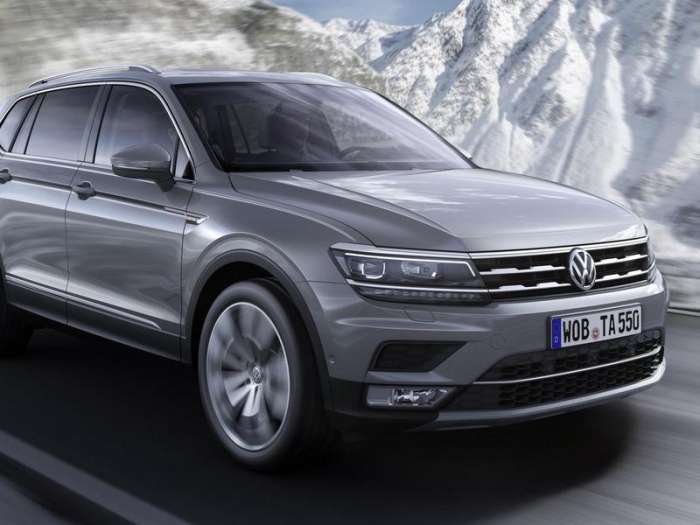 VW To Debut ‘The Long Tiguan’ At Geneva Motor Show

Volkswagen's ambitious launch schedule continues at the Geneva Motor Show where the Tiguan Allspace, the "Long Tiguan," built on the platform that is also used underneath the new VW Atlas crossover, will be introduced.
Advertisement

A couple of months ago, spy pictures and rumors abounded about a new, long Volkswagen Tiguan. Fairly quickly, though, things went from the rumor stage to actuality as factory-backed teaser images circulated through the automotive press. At that time, planning put the official launch for the long Tiguan at the Geneva Motor Show, beginning next week.

Well, time has passed, and Geneva is about to go live and now comes the news that Volkswagen, as part of its multi-vehicle debut plan will introduce the automakers Tiguan Allspace.

According to VW, the Allspace “closes the gap between” the compact Tiguan and the premium Touareg. The Allspace is substantially longer than its smaller five-passenger sibling. The "Long Tiguan" uses the same platform as the U.S-made Atlas. The platform adds four inches to the wheelbase of the Allspace. Overall, the Tiguan Allspace is nearly nine inches longer than the smaller model. The Atlas, built in Chattanooga, is a standout U.S.-made model that is built and sold primarily for the North American market.

Perhaps the most interesting difference between the Tiguan and the Tiguan Allspace is the optional third row of seats. The third row increases the seating capacity from four to seven seats. It makes the Tiguan Allspace far more flexible. Flexibility extends to cargo-hauling. For example, with five on board the Allspace cargo capacity hits 27-cubic-feet. With only one or two onboard you have access to 68 cubic feet of space.

A total of six engines, ranging from 147 to 236 horsepower, is available. And, all-wheel-drive, using Volkswagen’s proven 4Motion system, is available as well.

Overall, the beautiful styling on the Tiguan Allspace highlights its custom front section. The window line of the Allspace has also been redone to account for its longer body. There is also more standard equipment.

The Allspace offers a full load of technology and connectivity. The infotainment system provides a first on the Allspace, gesture control.