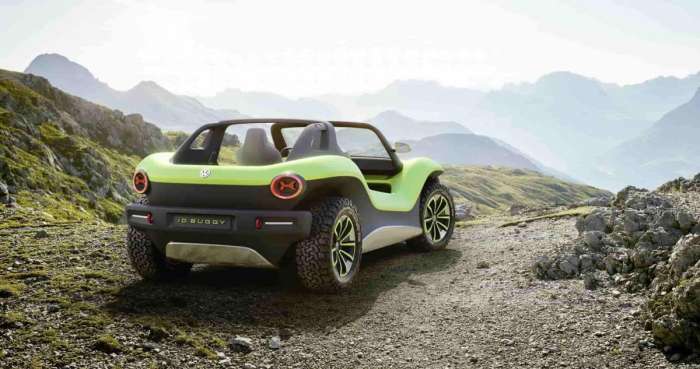 Like the retro-futuro I.D. Buzz, Volkswagen has again gone to the past for inspiration for a modern, yet retro, two-place dune buggy. The new I.D. Buggy will join the I.D. electric family. Like the buggies of the past that the automaker emulates, the new I.D. Buggy is as much a work in progress, as it is a solid, set-in-stone plan.
Advertisement

Although there have been semi-official and official hints and indications that an electric dune buggy would be joining the VW lineup, the automaker made it official this week at the Geneva International Motor Show. At the show, VW introduced its latest retro-futuro concept, the I.D. Buggy.

Newest I.D. Vehicle Looks Back To The Past

The Buggy takes its inspiration from the classic California dune buggies of the 1960s. At once, it shows the versatility of the modular electric drive matrix (MEB) platform that underpins the new generation of electric VWs. The automaker has promised a minimum of 27 new electrics by 2025, although the count could reach 30 across the manufacturer’s 12 subsidiaries.

The I.D. Buggy is another of VW’s retro-futuro designs – the I.D. Buzz is one, as well -- that owes its inspiration to the past while also being at the cutting edge of technology. Its chassis integrates a 62 kWh lithium-ion battery – located in the floor – with a rear-mounted 201-horsepower electric motor. The pair yields an expected range of 155 miles.

This Is A Minimalist Design

The I.D. Buggy is minimalist. There are no doors or roof on the two-seater. It reportedly delivers the purest experience of classic beach cruising. Like the classics of the 1960s and 1970s, the Buggy is versatile. Making use of the legendary rear-wheel-drive/rear-engined Beetle, small manufacturers stretched fiberglass over the body and its four-cylinder engine to build a wide variety of vehicles. The vehicles ran the gamut from strict dune buggies to specialized kit cars. Indeed, some of the more interesting “cars” of the 1960s were little more than Beetles with swapped bodies.

According to VW, the I.D. Buggy is easily as versatile as the original Beetle buggies. Though the I.D. Buggy is a two-seater, its conversion to a four-place, 2+2 is relatively easy. And, it can easily be set up as a four-wheel-drive vehicle as there is enough space available for a second electric motor to drive the front wheels.

Also, the Buggy’s modular design allows for the composite upper body to be detached from the MEB chassis, opening up a world of possibilities for third-party manufacturers. Indeed, that precisely what the Meyers Manx kit did for the first buggies.