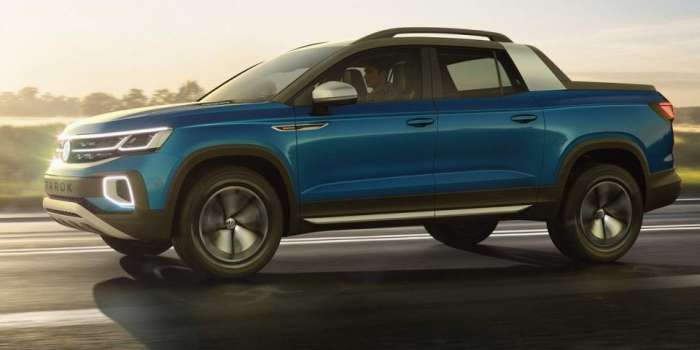 VW Announces New Pickup That Will Never Make It To The U.S.

Like it has in the past, Volkswagen has teased a new pickup model that won't make it to the United States. Instead, it is slated for Latin America to start and its markets may be expanded in the future. Meantime, VW could produce another pickup, based on the Atlas Tanoak, but that is still sometime downstream.
Advertisement

Over a year ago, Torque News asked Volkswagen a simple question about the automaker’s Euro-based pickup, the Amarok. The issue was this: was the automaker planning to bring the mid-sized pickup over to the U.S.? The answer was one that we have heard before: No not really. Why we pushed on: And, the answer was that the Amarok was too small for the U.S. market and that it wasn’t competitive.

No Surprises Here; VW Has Done It Before

Well, and this shouldn’t surprise anyone, VW has done it again. VW, taking advantage of the Sao Paulo Motor Show introduced what it calls a new concept pickup, the Tarok. Like the Amarok, there are no plans to sell the compact pickup in the U.S. market. Interestingly, the “concept” truck is already a competitor. Though VW maintains – at this moment, anyway – the Tarok is a concept, the automaker also admitted at the show that the new model would be going into production soon. Or, to put it the way VW put it, the Tarok is “certain” to go into production with “barely any changes.” The apparent plan is for VW to begin making the Tarok in Brazil. Indeed, all it will take is some production headlights, and some accents and the new compact pickup is ready to go. The current thinking is that the Tarok will be made for Latin America with future expansion possible, though not the U.S.

It's a shame, too, because the Tarok s a nice-looking pickup. The truck’s front end sports the VW’s latest look. There is also a targa-inspired roof bar, the sleek front fascia and a set of taillights that span the rear.

On the inside, a largish blue dash panel breaks up the black and gray theme while screens dominate the center stack for the Digital Cockpit and infotainment systems.

The concept pickup features the company’s 1.4-liter inline four, while the production version uses a 2.0-liter four-cylinder turbodiesel. The powerplant produces 148 horsepower. Mated to the engine is a six-speed automatic that distributes power to the four wheels (4Motion® system). Capable of hauling 1.1 tons, the Tarok features an innovative bed. The back of the passenger compartment folds out to accommodate long items when they are too long for the standard bed. This feature increases the bed’s size up to a total of 9-feet-1 (109 inches).

As noted, Volkswagen has no plans to bring the Tarok to the U.S. Plans call for the pickup to be built for Latin America with future expansion possible outside the U.S. Meanwhile, there is a report that VW and Ford may have a deal brewing that will result in the next-generation Amarok pickup sharing a platform with the Ford Ranger. VW has also rolled out the possibility of a pickup for the U.S., based on the Tanoak concept. refer However, there is no word whether the truck will make it to production. Indeed, future activities could depend on just how much Ford and VW do collaborate. (refer)

One of the truck's party tricks is a neat pickup bed. When a driver needs to lug around longer items, the back of the passenger cab can fold down. When folded, the bed's size increases for extra-long items for a total of 109 inches, or 9-feet-1-inch. The Tarok will also haul up to 1.1 tons, or 2,200 pounds.

Meantime, VW also teased another potential pickup based on the Atlas Tanoak concept Atlas Tanoak Concept Weighed By Automaker. that was unveiled several months ago. There is no word on whether the truck will reach production. Indeed, it is quite likely that new pickups may depend on just how deeply Ford and VW commit to the collaboration that was also announced recently. VW, Ford In Collaboration Talks; Pickup Could Result.