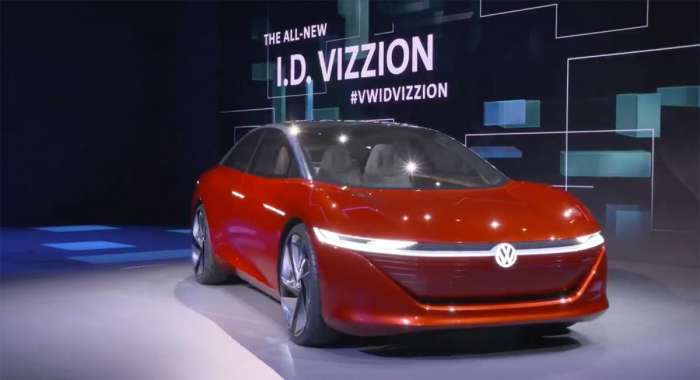 Volkswagen Investment On Electrics, Autonomy, Tech, Mobility Will Be Yuuuuuuge!!!!

Imagine what $50 billion looks like. It's a number so big that if you were to take all the money that makes up the figure and lay it end to end, you still wouldn't know how far it would stretch. With that said, though, $50 billion is the amount VW will be investing in electric cars, autonomy, mobility, and such between now and 2023. It's a lot of money.
Advertisement

Volkswagen has some huge investment plans as it transforms itself from a traditional carmaker to the manufacturer of electric vehicles. To be sure, there is a lot more on the line than just the electric car piece as the automaker also will invest heavily in not only vehicles, but also digitalization, autonomous driving, and mobility services. How much will all of this cost? The automaker told Automotive News recently that the investment will be $50.2 billion (E44 billion) and it plans to have the pieces in place by 2023.

One of the ways VW plans to achieve this goal is by increasing the productivity of its plants by 30 percent by 2025. To reach the productivity goal VW intends to share its assembly lines between its different brands. Indeed, it has already started to happen as VW’s Euro brands – SEAT, Skoda, Audi, Porsche – are now building models on one another’s assembly lines. By sharing its lines, VW hopes it will lower capital expenditure ratio to six percent of revenues from 2020 onward.

The $44 billion investment plan is $11.4 (E10 billion) more than last year’s planning round. The spending is about 30 percent of VW’s five-year budget on property and assembly plants. The automaker aims to carry out its ambitious plan to lower its capital outlays to six percent of sales by 2020. To achieve its plan, VW’s 120 plants worldwide have to continue reducing costs. Looking at the numbers, the automaker has moved a long way toward making its goal already as the ratio of outlay to sales shrank to 6.4 percent.

Meantime, VW has an ambitious electric vehicle launch program starting in 2019. Leading the parade of electric launches from Porsche and Volkswagen are upscale models. Meanwhile, the Volkswagen plans a significant launch of affordable I.D. branded vehicles that will start next year and continue until about 2022.

Automaker To Make Serious Use Of Single Platform

Interestingly, many of the vehicles that the automaker may build use VW’s MEB electric vehicle platform. VW said it might use the versatile platform to make as many as 15 million affordable electrics using the I.D. label.

Herbert Diess, chief exec of the automaker, told a press conference, that VW “must become more efficient.” The carmaker must also become more productive and profitable to “finance the high expenditure” in the future so it will remain “competitive.”

LG's New EV Battery Plant Is a Welcome News for Tesla
Tesla Giga Berlin's New Hurdle: It's Not Only the Gov't, but Now Tesla Itself
END_OF_DOCUMENT_TOKEN_TO_BE_REPLACED