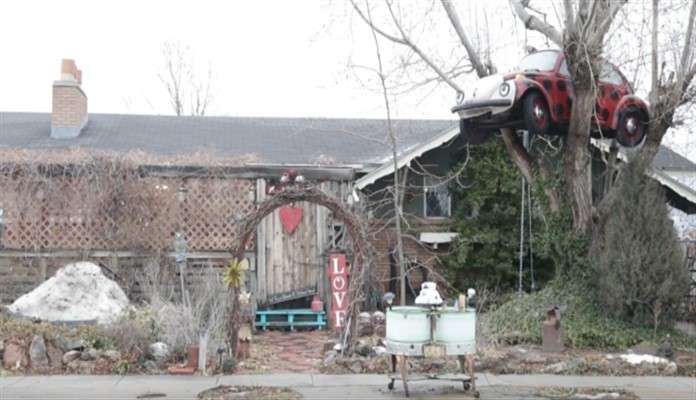 Utah city wants granny’s VW artwork out of a tree; she can’t see why

Clearly, the authorities in Clearfield, Utah, have way too much time on their hands. After all, why would officials declare a piece of art to be a nuisance and then demand it be taken down? The artwork in question is a tree-borne VW named Lucy and her owner can't figure out why all the fuss. The whole issue was initiated by an unknown complainant, too. Perhaps, they should get new lives and leave Janis Zettel, alone.
Advertisement

Come on folks, what else would you do with a 1973 VW Super Beetle, but make it a piece of art? Since it doesn’t have an engine and the interior has been gutted, you can’t do much more, right? That’s what Janis Zettel of Clearfield, Utah decided to do with the VeeDub that was given to her by her son.

When she received it, the ancient Bug was not running, so Zettel decided to make it into a work of art. And, as luck would have it she had the perfect spot for the auto art work, a tree in her front yard. To complete things, Zettel painted a couple of smiling ladybug eyes on Lucy, as she named her bug.

A neighbor with a forklift placed Lucy in her tree-borne berth and then the Beetle was bolted, braced and banded into place. To make sure everything was all right, Zettel also contacted the city arborist to drop by and give it a once- or twice-over to make the VW was securely in place and the tree was okay.

Now, that should have been all there is to this story, but, wait, there is more – you might have guessed. An unidentified neighbor, clearly a curmudgeon with no discerning taste in art, complained about the artwork to the city. The city then declared the treed-VW a Class-B nuisance vehicle, which is a misdemeanor in the fair city of Clearfield and demanded that the treed-VW be removed. Artwork bothers someone and city wants it gone.

A puzzled Zettel asked how can it be considered a vehicle if there’s no engine and the interior is gone? About the only use that Zettel can see for Lucy is her role as the treed-Beetle. The VeeDub is a delight to not only her grandchildren but to others who stop by to look.

But, the city is adamant and is sticking to its guns. Zettel has started a petition drive to save Lucy. So far, she has received 832 signatures of the 1,000 she is seeking.

Clearly, this is would seem to be a First Amendment issue as this is an expression of her artistic thought, but, it does seem the city doesn’t feel that way. Indeed, some have wondered how an anonymous person has standing to demand Lucy be taken from her perch? After all, there are no restrictions as Zettel’s home isn’t part of a homeowner’s association, so she should be able to keep things, placing them wherever she wants. Maybe it is time for the city to get a life and move on to more important matters and leave Lucy alone.