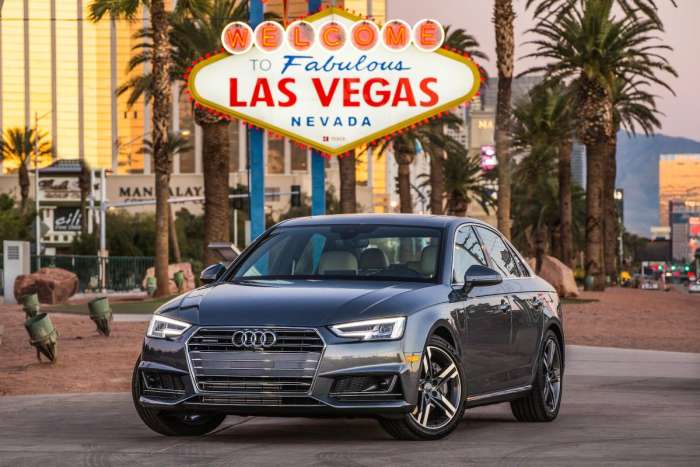 Technology Upgrades Featured In Audi For 2017 - Audi Lineup for 2017

Major additions in Audi's technology packages highlight the Volkswagen's subsidiary's lineup for 2017. In addition, the three-row Q7 has been restyled so it is smaller on the outside, yet roomier on the inside.
Advertisement

There is plenty of change at Audi in 2017, although there are no new models planned. The newest model changes arrived in 2016, a renewed Allroad and the restyled Q7, a three-row crossover. Meantime, the lineup features a host of technology changes and updates. For instance, the A4, still a strong seller in a down sedan market, sports one of the most advanced technology packages on the market.

An innovative addition to the Audi lineup is the first use that V2V communications technology that we have seen in any vehicles to date. V2V technology – vehicle to vehicle – is a communications suite that allows cars to communicate with other vehicles; systems, and objects. Though it is very early on, the city of Las Vegas and Audi have already agreed to allow Audis to communicate with their traffic control system. It is the first use of this technology on a real-world basis. The tech suite also features semi-autonomous driving (self-driving) technology.

In an interesting note, the Q7 features upgrades that appear on the new Bentley Bentayga. Audi and Bentley are VW subsidiaries.

A3/S3 -- After leaving the lineup for several years, the Allroad rejoins the Audi stable. The Allroad is not quite a crossover and not quite a wagon. It is a high ground clearance derivative that handles like a car and offers the advantages of an all-wheel-drive crossover. Meantime, the front-drive A3/S3 series features a more powerful four-cylinder turbo motor as well as tech changes to the infotainment system. The new engine is a 2.0-liter, four-cylinder engine.

A6/S6 -- There is a new package – Competition – available for 2017 that features more horsepower.

A7/S7 -- The A7 series features some minor styling touches for 2017, as well as new wheel choices.

A8/S8 -- The turbodiesel version and the W-12 will no longer be available.

Q7 -- An all-new three-row crossover, the Q7 offers two power choices; a 2.0-liter turbocharged four and a 3.0-liter supercharged V-6. Another power choice, a plug-in hybrid joins the lineup. The 2017 Q7 is smaller on the outside, yet offers more interior space. It also features a new suite of semi-autonomous technology.

R8 -- The mid-engined R8 supercar will be available with only a V-10 engine available. The R8 will be updated.

TT --The TT coupe features some minor changes after the changes that occurred recently which included a new aluminum body and other features. For 2017, a new backup camera is standard.